Manchester United midfielder Tosin Kehinde could make his debut for the club against West Brom after being promoted into first-team training after Maraoune Fellaini was ruled out until 2018.

The Belgian midfielder spent a month on the sidelines with a medial collateral ligament injury in October but he’s aggravated the problem after returning ahead of schedule and is now expected to miss the festive period.

Kehinde, 19, has spent the bulk of the campaign with United’s U23s side and is yet to make his debut for the club.

The Nigerian midfielder is primarily used in a central midfield position and could take a place on the bench for United’s visit to West Brom on Sunday.

The teenager tweeted on Friday afternoon to confirm that he had participated in first-team training as United prepare for their trip to the Midlands.

Scott McTominay was selected ahead of Ander Herrera to partner Nemanja Matic against Bournemouth in midweek and Paul Pogba is serving the last of his three-game ban against the Baggies.

United will be hoping Tottenham can take points off Manchester City during their clash at the Etihad on Saturday as the Red Devils chase down their neighbours’ 14 point lead.

Novak Djokovic confirms plans to catch Roger Federer and Rafael Nadal after returning to world No. 1

What teams are out of the World Cup and what are the last 16 fixtures? 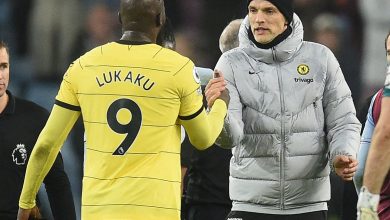 Aston Villa 1-3 Chelsea: Thomas Tuchel criticises schedule and says his side ‘are struggling’