Crystal Palace stars Wilfried Zaha and Ruben Loftus-Cheek say they have been blown away by the pace of Manchester United loanee Timothy Fosu-Mensah.

The Dutchman moved to Selhurst Park on loan in the summer when compatriot Frank de Boer was still in charge, though Roy Hodgson has only used him sparingly since taking over.

But he has already left a big impression on his teammates and is regarded as the quickest player at a club blessed with plenty of pace merchants, such as Zaha himself and Andros Townsend.

Asked to name the fastest player at Palace during an interview on Sky Sports, Loftus-Cheek said without hesitation: ‘Timi’s quick.’

Zaha agreed, chiming in: ‘Someone will be through one on one with the goalkeeper and he’ll come steaming in from nowhere and just tackle him.

‘His pace is ridiculous!’

Fosu-Mensah showed exactly that skillset on the opening day of the Premier League season against Huddersfield, gobbling up ground to make a superb last-ditch tackle on Steve Mounie.

It had been suggested recently that Fosu-Mensah’s loan might be cut short prematurely, with United unhappy with his lack of pitch time under Hodgson.

However, he started Palace’s last two Premier League matches prior to Saturday’s game at Leicester, against Bournemouth and Watford – against whom he picked up a knock.

While Fosu-Mensah may be the quickest player at Palace, there are a few at United who might give him a run for his money – not least Marcus Rashford and Anthony Martial! 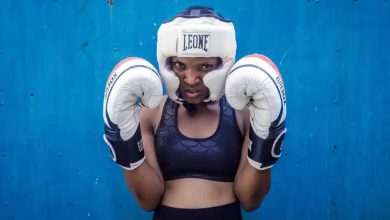 ‘I’m a warrior now’: how boxing is transforming the lives of young Nigerian women