While ostensibly a season of celebration and gift-giving, Christmas has found itself embroiled in number of controversies over its Christian character involving college campuses, figurines and the US president himself.

Though its roots can be traced back to midwinter festivities of pagan and Roman Europe, Christmas has been celebrated by Christians worldwide on December 25 (or January 7 if you are Orthodox) as the birthday of Jesus Christ. Recent decades, however, have seen the religious aspects of this holiday chipped away both by secularism and rampant consumerism, and some conservative commentators have declared there is a “War on Christmas.”

As yuletide draws nearer, RT looks back on a few of the Chrimbo controversies that have erupted over the past few weeks.

No Christmas on campus!

Santa Claus, Christmas trees, wrapping gifts and jingle bells are all regular fixtures of the season, but not, apparently, at the University of Minnesota, where a newsletter from the Dean this week informed students that “specific religious iconography” is “not appropriate for gatherings and displays at this time of year” and advised students to “consider neutral-themed parties such as a ‘winter celebration’” instead. Jewish symbols of Hanukkah such as dreidels were also listed as undesirable.

The U of M (@UMNews) shared this letter with some faculty and student employees this week The colors red & green, blue & white/silver are verboten during the "winter celebration" period. Images of Santa, wrapped gifts, and bells are also deemed "religious iconography." #BahHumbugpic.twitter.com/sxzqDXLLqY

The handout also encouraged students to report any dissident decorating to the Office of Equal Opportunity and Affirmative Action. However, university spokeswoman Emma Bauer told Fox News that the letter was a “conversation piece to facilitate dialogue at a voluntary, internal college event on respecting religious diversity in the workplace,” and not official college policy.

Among the self-proclaimed defenders of the Christmas tradition is US President Donald Trump, who has decried the role “political correctness” has had in dampening the festive spirit, and has made a point of saying “Merry Christmas” instead of the more neutral expression, “Happy Holidays,” favored by the Obamas.

“They don't use the word 'Christmas' because it's not politically correct,” he said in a speech in October. “We're saying 'Merry Christmas' again.”

True to his word, the Trump family’s Christmas card this year read “Merry Christmas and a Happy New Year,” and is signed by Melania Trump, her son Barron and the POTUS himself.

But there might be some discord in the First Family’s household as daughter Ivanka Trump tweeted “Happy Holidays!” on Tuesday, inadvertently inviting a wave of sarcasm. Ivanka is married to Jared Kushner, who is Jewish, and herself converted to Judaism in 2009.

While over half of Americans don’t mind whether they are greeted with a “Merry Christmas” or a “Happy Holidays,” according to a recent Pew survey, the latter can be deeply offensive to conservative Christians who consider it an attack on their beliefs.

Across on the other side of the Atlantic, France’s fiercely secular tradition of "laïcité" forbids the expression or proselytizing of religion in many public places, leading to court rulings against local authorities putting up nativity scenes in their town halls. But earlier in December Laurent Wauquiez, the president of the Auvergne-Rhône-Alpes region and contender for the leadership of the right-wing Republicans party, found a way to get around the ban by claiming his nativity set-up was in fact a celebration of the work done by local artisans.

“Judges have banned us from displaying a nativity scene in the town hall and other public buildings,” Wauquiez said. “And so this year, we have organized an exhibit about the art of making santons [nativity figures].The aim is to put forward this extraordinary savoir-faire, and for people to find out more about how the traditional figurines are made.”

M Wauquiez’s “exhibit” was criticized by local left-wingers, who accused him of acting “like a child.”

No Christmas in the classroom!

Parents, officials and politicians alike complained to the Gribskolen primary school in Graested, Denmark, earlier this week after it chose to cancel the traditional Christmas service, in an effort not to exclude pupils from different religious backgrounds.

"We took the decision because we have children who are not Protestant,” Marianne Vederso Schmidt, the head of the school, wrote in an intranet posting earlier this month, adding that “it must be left to the individual families whether they want to privately attend a service.”

A group of 10 parents were the first to criticize the decision, which was quickly picked up by the national media.
“I don’t see why our tradition has to be taken away from us, just because someone else at the school believes in something else,” Mette Brüel-Holler, the mother of two enrolled daughters, told TV2. “I come from a small community, where the church is important, and these traditions are beautiful. I remember enjoying them myself as a child, and they are a fundamental part of Christmas.”

Some speculated that the move was made to avoid offending the sensibilities of Muslim students, and right-leaning politicians too weighed in on the argument. “We are a Christian country with our own traditions,” Marie Krarup of the Danish People's Party wrote on her Facebook. “We should not sacrifice this in the name of multiculturalism.”

However, the chairman of the School Leaders Association, Claus Hjortdal, has said that there is no rule saying that there must be a Christmas service at the end of term, and pointed out that many schools do not have one at all.

In the past, Christmas celebrations have been banned by Puritan Christians in both England and America, as well as by communist regimes such as Cuba and Albania. These days an actual ban on festivities is only observed in a handful of mostly Muslim countries. 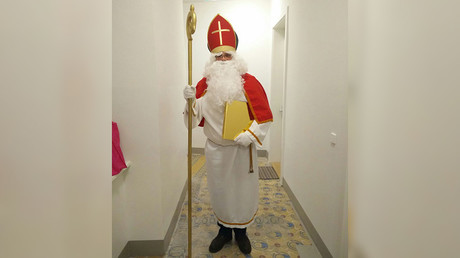 In 2015, Somali officials declared that public celebrations on Christmas have no place in a Muslim society, and may provoke an attack by militant group al-Shabaab. The few Christians remaining in the country, mostly foreigners, are allowed to practice their beliefs in private. Around the same time the sultanate of Brunei in Southeast Asia also outlawed Christmas, and anyone caught wearing a Santa hat there could face five years in jail.

The same year, the majority-Muslim but officially secular ex-Soviet republic of Tajikistan passed laws banning Christmas trees, gift-giving, dinners, fundraising and fireworks, having already banned Father Frost, the Russian version of Santa Claus, from TV screens in 2013. The measures apply to both Christmas time and New Year's, and are intended to guard Tajikistan’s cultural traditions from foreign influences.

Christmas is banned in communist North Korea, where the nation's Christians are forced to practice their beliefs in secret. In 2014, Pyongyang threatened to hit a Christmas tree erected on the South Korean border with an artillery strike.

The post Battles fought over Christmas in 2017 appeared first on News Wire Now.

Israel Condemns Passing of Polish Holocaust Legislation: ‘No Law Will Change the Facts’