A teenager died hours after being bitten by his pet cobra and posting pictures online asking for help.

On the morning of December 11, the boy – known only as Aril – was bitten on his arm by the venomous animal while trying to take a photo of it.

Vimto claim they are a victim of the war in Yemen

The 14-year-old, from Indonesia, posted the first of two pictures to WhatsApp at 9.50am local time.

It is understood to have shown the snake spreading its hood seconds before striking.

The photo was sent with the caption ‘why not smile a little’ and was believed to have been taken after Aril had given the animal a bath.

But a second picture – sent at 9.54am – showed the boy’s bloodied right arm.

He had tied a shoelace around his arm as a makeshift tourniquet in an attempt to stop the venom from spreading to the rest of his body.

Aril sent the message ‘between life and death’ alongside the photo.

He reportedly later added: ‘If anyone considers themselves my friend, please take me to the hospital.’

The teenager was taken to hospital an hour later but was declared dead by medics at 10pm after he fell unconcious and emergency treatment failed to revive him.

‘Aril’s status wasn’t to boast about his injury, but to ask his friends for help,’ the boy’s mum, Neuis Marpuah, was quoted as saying.

She told local reporters that the boy had been home alone at the time of the incident. His dad was working abroad when it happened, she said.

According to reports, Aril collected snakes and owned more than a dozen of the reptiles.

He was also an active member of a non-government organisation that arranged street performances involving the dangerous reptiles in order to raise money for charities helping victims of natural disasters.

Campaign to save girl, 6, with rare cancer which makes her eyes bleed and protrude

King cobras measure 10 to 13 feet long and their venom is fatal to humans – often delivered in large quantities.

One bite may give off a dose of 200 to 500mg of venom, meaning a large amount of antivenom would be needed to reverse the symptoms.

It sends the victim into a coma, before they suffer heart and respiratory failure.

A cobra bite has been known to kill within 30 minutes.

MORE: Parrot escapes jaws of death after massive python tries to eat it

MORE: Horrifying spider with hundreds of babies on its back creeps up on tourists

In State of the Union, Trump Celebrates Islamic State Win While Ignoring Kurds Who Made It Possible 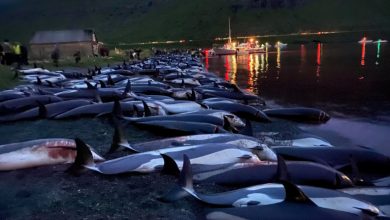 Faroe Islands: Anger over killing of 1,400 dolphins in one day