It might be quite some time since Trinny and Susannah graced our screens with What Not To Wear, but one things for sure….

And yes, thats nits. Not knits. Knits are always a good look.

Susannah has now revealed a long term battle with a chronic headline infestation.

In fact, her battle with nits has become so serious that it has lasted three years as the little blighters have become immune to the traditional remedies for removal.

Now, the 55-year-old mother-of-three has revealed that only one thing has finally knocked the issue on its head – as she has had the nits successfully ‘vacuumed’ up by hair care professionals at the Hairdorce clinic! 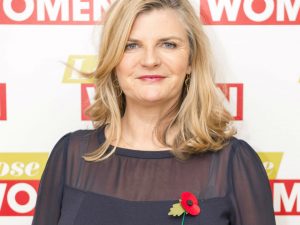 Revealing her trauma with the itchy-sitch, Susannah has shared with The Daily Mail the process of removing the chronic head lice – an issue which has left her ‘humiliated’ over the years.

The fashion pro explains that professionals basically vacuum the nits up through a pretty high tech routine.

Susannah writes, ‘My hair is to be pig-tailed, scorched and, in a coup de théâtre, professionally ‘hoovered’ in an attempt to rid me once and for all of the lice that, around the country, are becoming ever-more resistant to standard treatments’.

Speaking of her experience with this process, Susannah explains that it is pretty intense, ‘The sensation is at first alarming, but the combination of suction and the scraping of a specially fitted metal comb soon takes hold and I became like an infested dog having her head scratched. Bliss’.

The process, which costs over £200 and lasts 90 minutes, also involves ‘phase two’ involves hot air being blasted onto her scalp to ‘dehydrate the eggs and eradicate the remaining offenders’.

No, it’s not just you. We’re itching all over too. Glad you’ve got it all sorted now Susannah!

FROM: Our sister site, CelebsNow. Written by Alice Perry.

‘Look at that figure!’ Holly Willoughby SHOCKS fans with incredible throwback snap from 10 years ago