US Olympic gold medalist McKayla Maroney has filed a lawsuit against USA Gymnastics alleging that she was paid to keep quiet about sexual abuse suffered at the hands of the team's disgraced former doctor Larry Nassar.

Maroney spoke of ‘systematic sexual abuse’ by Nassar, who worked for nearly 30 years as the team doctor, under the pretext of medical treatment. Earlier this month, Nassar was sentenced to 60 years in prison after pleading guilty to three federal child pornography charges, and will be sentenced in a separate sexual abuse case on January 18.

The Wall Street Journal reported that Maroney’s lawsuit alleges that the Olympic champion signed a confidential $1.25 million settlement agreement with USA Gymnastics in December 2016, after Nassar was arrested in Michigan on the child pornography charges.

The agreement included a non-disclosure clause relating to Maroney’s allegations of abuse by Nassar. Maroney's attorney, John Manly, who filed a lawsuit on behalf of the gymnast on Wednesday, said the London 2012 gold medalist willingly signed the agreement, but did so under psychological trauma brought on by the news that dozens of other women had been victims of Nassar.

"I want people to understand that this kid had no choice. She couldn't function. She couldn't work," Manly told ESPN. "Confidentiality agreements in child sex abuse cases are unlawful in the state of California and have been for years. We're basically saying USAG and its lawyers violated the law by asking McKayla to agree to it and that she should be free to talk about her abuse to whomever she wants, whenever she wants.”

The 22-year-old Maroney, who is now retired from gymnastics, broke the agreement in October after posting an emotional statement on her Twitter page, in which she detailed Nassar’s seven-year-long sexual abuse, beginning when she was just 13 and continuing to her retirement from competition in 2016. 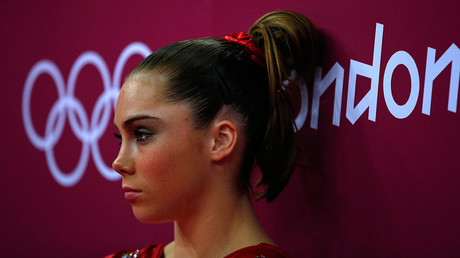 "I was molested by Dr Larry Nassar, the team doctor for the US Women’s National Gymnastics Team, and Olympic Team," she said in the statement. "Dr Nassar told me that I was receiving medically necessary treatment that he had been performing on patients for over 30 years.

“It seemed whenever and wherever this man could find the chance, I was ‘treated,’” Maroney wrote. “It happened in London before my team and I won the gold medal, and it happened before I won my silver” she added.

It remains unknown whether USA Gymnastics made offers of similar agreements to other alleged victims. The lawsuit filed by Maroney names the United States Olympic Committee (USOC), USA Gymnastics, Nassar and his employer, and Michigan State, as defendants.

When and where is the next Summer Olympics?