It was one of the biggest celebrity relationship scandals of the past few years.

And now, Strictly presenter Tess Daly has admitted that she’s still working on marriage to hubby Vernon Kay, seven years after it was revealed that he had sent inappropriate messages to another woman.

Tess and Vernon’s 14-year marriage hit the rocks in 2010, after he admitted that he’d sent sexual massages to model Rhian Sugden.

The couple hit tough times after the revelation, and Vernon was forced to issue a public apology to his wife, live on the radio.

But now, Tess has revealed that years on, the pair’s marriage is still a “work in progress”.

She told The Times, “All marriages have their moment,

“Marriage is a work in progress. Vernon and I are just people, at the end of the day.”

It’s the first time that Strictly star Tess has spoken publically about her marriage since the drama hit the headlines.

But at the time, 43-year-old Vernon admitted he’d been “daft” and “stupid” but wanted to “wipe the slate clean”.

Back in 2010, it was also said that Vernon had been messaging four other girls behind his wifes back.

And unfortunately, turmoil was to hit 48-year-old Tess yet again, when it was revealed in 2015 that Vernon had texted Rhian again.

However, the presenter defended the claims saying that Tess was aware of the contact, and his request to meet up with the glamour model yet again.

31-year-old Rhian has since spoken out about the public flack she’s received for the messages, claiming she did nothing – but that she’s the one people seem to dislike.

“He got drunk and sent inappropriate text messages to me. And I’m the one people would pour drinks on.”

The former Page 3 girl also claimed that the controversy has ruined her career.

“I’m the one people would spit on. My career didn’t go anywhere but his went up. I even lost contracts. I was just known as a sex-texter.”

However, Rhian has also been happily engaged to Coronation Street actor Oliver Mellor since 2014.

At the time, it was claimed that despite Tess’ humiliation, she wouldn’t consider leaving her beau of 14-years. The pair share two daughters together, Phoebe and Amber. 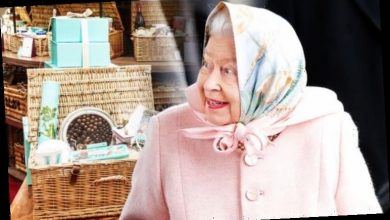 Inside the Queen’s £2,500 Christmas hamper – her favourite food including foie gras