Ramzan Kadyrov, the head of the Chechen Republic, wrote a social media post on Friday praising Russian President Vladimir Putin for “consistently defending the interests of the Islamic nations and peoples” while the United States and its allies “are bringing wars and destruction to the Muslim world.”

Russia’s RT.com notes that Kadyrov cited a promise to support traditional Muslims made by Putin to the Chechen parliament in 2006, and a more recent promise to support Islamic education he made to Muslim clerics in the Russian city of Kazan.

“In Chechnya alone, there are two Islamic universities, six Hafiz schools and dozens of Madrasas. For this, we are sincerely grateful to Vladimir Vladimirovich,” Kadyrov wrote. (Hafiz schools are religious academies focused on studying passages from the Koran.)

“But all rights are tied to responsibilities, and I am convinced that Muslims must actively counter the destructive and anti-Islamic movements such as Wahhabism,” Kadyrov continued. “Conciliatory positions never lead to anything good, and we will always adhere to our position that we must never allow Wahhabism to rear its head in any of the Russian regions.”

Wahhabism is a fundamentalist form of Sunni Islam emanating from Saudi Arabia. A 2013 analysis at World Policy posited that the Kremlin threw its support behind more moderate Islamic forces in Chechnya in part to hold Wahhabist guerrillas at bay.

“More moderate” is a very relative term, as Chechnya enforces Islamic dress codes on women and has been accused of forcing religious education on its citizens. Even more infamously, Kadyrov’s government has been condemned for violently persecuting gay men and women, most recently in a bipartisan resolution passed by the U.S. Senate in November. Kadyrov at one point attempted to refute these charges by claiming there are no gay people in Chechnya, so he couldn’t possibly be persecuting them.

RT.com mentions that Kadyrov used the Telegram social media platform to write his praise of Putin, but forgets to mention that he has apparently been banned from Facebook and Instagram for his human-rights abuses.

The Kadyrov government thinks the best way to deal with allegations of humanitarian abuse is to get rid of the people who make them. Human Rights Watch reported this week on Chechnya’s campaign of harassment, intimidation, and vandalism against a Russian human rights organization called Memorial. Kadyrov himself denounced Memorial as “snitches” and “enemies of the people” and vowed to “break the spine” of the group. 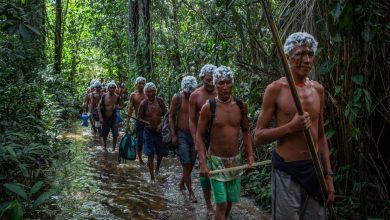 The indigenous tribes fighting the curse of xawara in the Amazon