Apparently, there are certain foods you should be eating in this hot weather to help keep you cool – including spinach, chilli and soup.

This is according to nutritionist Daniel OShaughnessy, who has teamed up with Just Eat to compile a list of the best foods to eat – and avoid – in order to cool down.

This summer has been one of Britains hottest on record, so its no surprise its been affecting the nations diet, routine and sleep patterns.

But Daniel says there are certain foods that can help this.

He says watermelon, turmeric and reducing the carbs and protein in your diet are all great ways to beat the heat.

Traditionally seen as a winter dish, he also says having a bowl of soup in the evening as temperatures start to drop can actually help you stay cool.

He said: It will make you perspire more, but as the sweat evaporates, the energy is absorbed into the air, therefore cooling the body.

Daniel also believes a spicy chilli is an excellent choice in hot weather explaining that the capsaicin found in the food sends a signal to your brain that your body is overheated.

As a result, you will sweat more to cool your body down.

Curcumin, which is the active ingredient in the spice, helps promote good circulation, helping to speed up your blood flow and cool your body down.

10 food hacks to cool you down this summer

Graham Corfield, of Just Eat, said: With the forecast showing no signs of cooling down, were all trying different ways to combat the heat – from having a cool shower as soon as you walk through the door, to avoiding standing in a hot kitchen.

What people may not realise is that some of your favourite dishes might just help make these temperatures more bearable.

Daniel also says that foods such as mint are great due to its cooling sensation, as well as spinach, which contains the vitamins and minerals needed to help keep your blood pressure under control, in turn keeping you cool.

And watermelon, which is high in water content, also contains citrulline, an amino acid which relaxes you and helps to dilate the blood vessels, meaning more blood can circulate around your body and cool you down.

But there are some foods to avoid, with Daniel advising Brits to cut down on carbohydrate-rich foods, such as rice and whole grains, and foods high in protein like meat.

He said: It may be harder to digest a high protein food in a heat wave.

Meat is quite hard to digest and the digestion process creates heat (thermogenesis) and can make you feel hotter in yourself.

Opting for plant-based dishes can be a good choice as less energy is needed to break vegetarian dishes down compared to meat.

MORE: Big Mac Energy is all about channeling McDonalds in your make-up looks 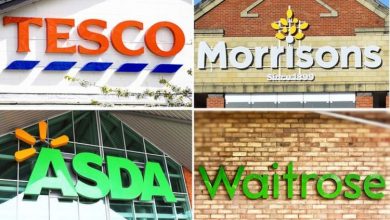