Manchester United believe they are close to a breakthrough in contract negotiations with Anthony Martial after holding encouraging talks with the forwards representatives, Metro.co.uk understands.

The Frenchman is out of contract at the end of the season, though United have the option of triggering a 12-month extension in his current deal to keep him tied to the club until 2020.

Martials entourage had been deep into negotiations with the club over a new deal in November 2017 and all parties felt they were close to an agreement.

However, Alexis Sanchezs arrival in January 2018 derailed Martials season and his goal against Newcastle ten days ago was his first in the league since the Chileans move to Old Trafford.

Martials agent sparked concern during the summer transfer window by claiming the Frenchman wanted to leave Old Trafford but Metro.co.uk understands the club felt this was an attempt to accelerate contract negotiations.

Jose Mourinho had been open to selling the 23-year-old but Martial has made an encouraging start to the season and United have made progress in recent weeks over a new five-year deal for the forward.

Mourinho made his concerns over Martial clear to Uniteds board over the summer and the fact theyre pressing on with talks does little to dispel speculation that the 55-year-old is set to lose his job.

The Portuguese coach was keen on cashing in on Martial in order to fund a move for a right winger but the club wanted to protect their £58m investment in the Frenchman and refused to sell him.

Martial scored Uniteds equaliser in their 3-2 comeback win against Newcastle before the international break but hes far from certain to keep his place in the starting line-up when United travel to Stamford Bridge to take on Chelsea on Saturday.

United enter a defining period after the international break and face a double header against Juventus in the Champions League following their clash at Stamford Bridge.

Luke Shaw is expected to be fit for the game against the Blues after withdrawing from Englands squad for games against Croatia and Spain with a groin strain.

The club are close to agreeing a new long-term deal with the former Southampton ace and will prioritise negotiations with Martial and De Gea after finalising Shaws future. 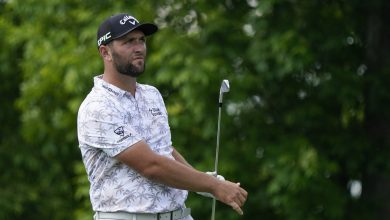 Jon Rahm: ‘The hardest part was not being able to see my young son’