A young couple survived for a month only eating food that otherwise would have been thrown away, in a bid to highlight just how much food is being wasted in the UK.

Sophie and Paul Collins decided to challenge themselves to see if they could make it a month without spending any money on food.

The couple, who run the blog Vegan On Board, asked friends and family for food they were planning to throw away. They also ate food that was past its sell-by date and foraged for fruit from trees.

A study by the Waste & Resources Action Programme, found that the average UK family is wasting nearly £750 by wasting food. The figures show that families throw away almost en entire, edible meal, every day.

Sophie and Paul saved around £400 over their four-week experiment – now theyre encouraging others to challenge themselves to limit their food waste.

For the first week, we struggled getting enough to eat and it was hard to put a proper meal together, explains Sophie.

But then we started to find ways to access more of the food that is being wasted locally.

Her husband Paul found that once they got into the swing of it, they had more than enough to last them the month.

We did a lot of foraging like collecting apples as some people have boxes outside their houses – that was mostly fruit because most people have fruit trees, says Paul.

We also asked families to look in their cupboards for what they wont have used for years. We ended up with this big hall of food and we lived off it.

I guess the thing that really started us off is that we are big fans of sustainability. I would really like to see a change for the better.

It is amazing how much you can find.

According to the UNs Food and Agriculture Organisation, one third of the food produced in the world for human consumption gets wasted every year – approximately 1.3 billion tons.

The FAO also found that in the UK alone, 8.4 million people struggle to afford a meal.

Sophie and Paul think living more sustainably, and being careful about what we waste, could make a big difference for hundreds of families.

The couple are now planning on trying to hit their target of £1,000 by hosting a fundraising feast for friends and supporters.

The challenge has made us more creative with the food we eat, says Paul.

We now know so many great ways to use stale bread – French toast, breaded mushrooms, garlic croutons – that we will never throw it away again.

The couple hope their food waste challenge, will also inspire others to hold supermarkets and suppliers accountable for the waste they produce.

MORE: How to become one of those people who work out at lunchtime

What is the milk diet and is it dangerous?

Surprise surprise, millennials are being blamed for a drop in potato sales 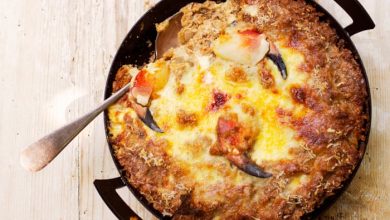