When Burger King announced the release of a halloumi burger, vegetarians rejoiced.

But we may have been pleased too quickly.

It turns out that while Burger King promotes their halloumi burger as a meat-free option, the halloumi is cooked in the same fryer and oil as their chicken and fish products.

Of course, for many vegetarians this wont be a problem. But those who require their food to be cooked separately from meat products, this is an issue that shuts off the burger as a fast food option.

Over on Twitter, vegetarians who hoped to try the burger werent pleased with this revelation.

@BurgerKingUK @guardian @vegsoc @AllergyUK1 Burger King. How could you call the halloumi burger suitable for vegetarians, when it's cooked in the same oil as chicken.

Wow, so get to @BurgerKingUK & ask about the new #halloumiburger the staff member informs me that it is fried alongside the chicken? Can you confirm this? #vegetarian #veggies

@BurgerKingUK Just went to try the new halloumi burger, lucky i read the very small print because it is fried in animal fat and im vegeterian. Very missleading and i presume your chips are the same. ITS 2019 GUYS @vegsoc #vegeterian #halloumiburger #burgerking #containsmeat pic.twitter.com/jOC8Kf2uZN

We had a chat with the team over at Burger King, who confirmed that the halloumi burger is indeed fried in the same fryer as the chicken and fish.

A spokesperson told Metro.co.uk: At this moment in time were not operationally able to facilitate separate fryers and oil filtration systems in all of our restaurants. However this is a focus for us and our team are actively looking into solutions for how we can change this in the future.

When we asked about why they bothered to release a vegetarian option thats cooked in the same area as chicken and fish, Burger Kings PR team were quick to state that they havent described their halloumi burger as vegetarian, instead using the term meat-free.

Thats true – in the original press release Burger King describes the burger as an addition to their meat-free alternative range.

And in the images of the burger, theres some small print at the bottom stating that the halloumi is cooked in the same fryer as chicken and fish. 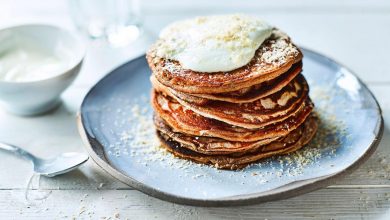 The emotional stages of Pancake Tuesday

Beer and beards come together to form The Brawtherhood Brew