Hurricane Dorian has dropped in strength to a category three storm but is now stationary and continues to batter the northern Bahamas.

The maximum sustained winds fell to 125mph (205km/h) on Tuesday but Grand Bahama faces at least another day of heavy rain and storm surges.

Dorian killed at least five people when it hit the Abaco Islands to the east rated category five, with 185mph winds.

The eastern US coast remains on alert for Dorian to move in that direction.

What's the latest on Dorian?

The most recent update from the US National Hurricane Center (NHC) placed Dorian just north of Grand Bahama, home to about 50,000 people, having moved barely 20km (12 miles) in a day.

The NHC described Dorian as "stationary" with maximum sustained winds below the 130mph that would mark it as a category four on the Saffir-Simpson hurricane scale.

But the NHC warned that the storm was still producing gusts up to 155mph and storm surges 12ft-18ft (3.6m-5.4m) above normal, and the agency advised residents to remain in shelter on Grand Bahama throughout Tuesday.

The winds at the core of the storm were spinning so fast that the centre of the storm was collapsing on itself, causing it to expand and damage a larger area, according to the BBC Weather service.

Palm Beach county in Florida – less than 100 miles to the west – saw gusts of up to 58mph on Tuesday.

How is Grand Bahama faring?

Eyewitness videos and reports painted a picture of massive and widespread flooding, with panicked families fleeing to their roofs to escape rising floodwaters.

The Bahamas Press showed video of the Rand Memorial Hospital in Freeport under water, with patients forced to evacuate. The news site also relayed calls for help from residents trapped on roofs for hours.

Freeport resident Yasmin Rigby told the Reuters agency: "People who thought they were safe are now calling for help".

The Bahamas international airport was reportedly under 6ft of water, while residents posting on Twitter said a church in Freeport had lost its roof and scores of people were in danger.

A video posted on Facebook showed the extent of the storm surge and lashing winds in Pine Bay in Grand Bahama.

Clint Watson, a journalist based in the capital Nassau, said people in Grand Bahama were being hit with "buckets of rain" and posting videos online showing water rising to the windows of their attics.

"You can't fathom that but that's what people are showing us with their videos," he told the BBC. "And you can see the water outside pressing in. It's stories like that and images like that that you can't get out of your mind."

One radio station told the Associated Press news agency it had received more than 5,000 distress calls.

What about the rest of the Bahamas?

The picture was clearer on the Abaco Islands after Dorian moved further west. The islands, with a population of about 17,000, bore the brunt of the storm. No hurricane had ever made landfall with greater wind speeds. Only the 1935 Labor Day hurricane can match Dorian's 185mph.

Prime Minister Hubert Minnis said on Monday that reports from the Abaco Islands suggested the devastation was "unprecedented", calling the hurricane a "historic tragedy".

Rescue operations were reportedly underway in areas it was safe to enter.

Neither the Abacos nor Grand Bahama are much higher than 40ft above sea level at their highest points. The International Red Cross said it feared wells may have flooded, making clean water unavailable. The organisation said 13,000 houses were feared damaged or destroyed across the nation.

Images from the capital Nassau to the south showed extensive flooding. Matthew Cochrance, a spokesman for the Red Cross, said aid workers were expecting "significant humanitarian needs" in the Bahamas once the storm passed.

What about the US?

Forecasters said they feared Dorian would move "dangerously close" to the US east coast but on Tuesday the path of the storm remained difficult to predict.

The NHC said that only a slight deviation could bring Dorian directly over Florida's east coast, which was already expected to face life-threatening storm surges and dangerous winds in the coming week.

Florida, Georgia and North and South Carolina all declared states of emergency and there were mandatory evacuation orders across many areas.

Scientists cannot say whether climate change is increasing the number of hurricanes, but the ones that do happen are likely to be more powerful and more destructive because of our warming climate, said BBC Weather's Tomasz Schafernaker.

Use our guide to see how these deadly storms form, their devastating effects and how they are measured:

A guide to the world's deadliest storms

Hurricanes are violent storms that can bring devastation to coastal areas, threatening lives, homes and businesses.

Hurricanes develop from thunderstorms, fuelled by warm, moist air as they cross sub-tropical waters.
Warm air rises into the storm.

The storm rotates due to the spin of the earth and energy from the warm ocean increases wind speeds as it builds.

When winds reach 119km/h (74mph), it is known as a hurricane – in the Atlantic and Eastern Pacific – or a typhoon in the Western Pacific.

The central eye of calmer weather is surrounded by a wall of rainstorms.
This eyewall has the fastest winds below it and violent currents of air rising through it.

A mound of water piles up below the eye which is unleashed as the storm reaches land.
These storm surges can cause more damage from flooding than the winds.

"Urgent warning about the rapid rise of water on the SW FL coast with the passage of #Irma's eye. MOVE AWAY FROM THE WATER!"
Tweet from the National Hurricane Center

The size of hurricanes is mainly measured by the Saffir-Simpson scale – other scales are used in Asia Pacific and Australia. 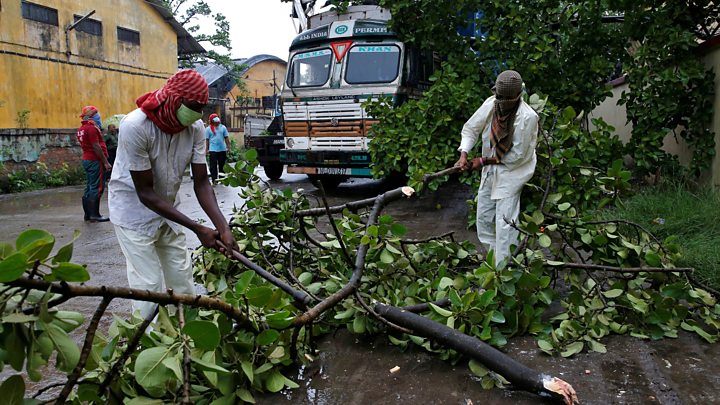 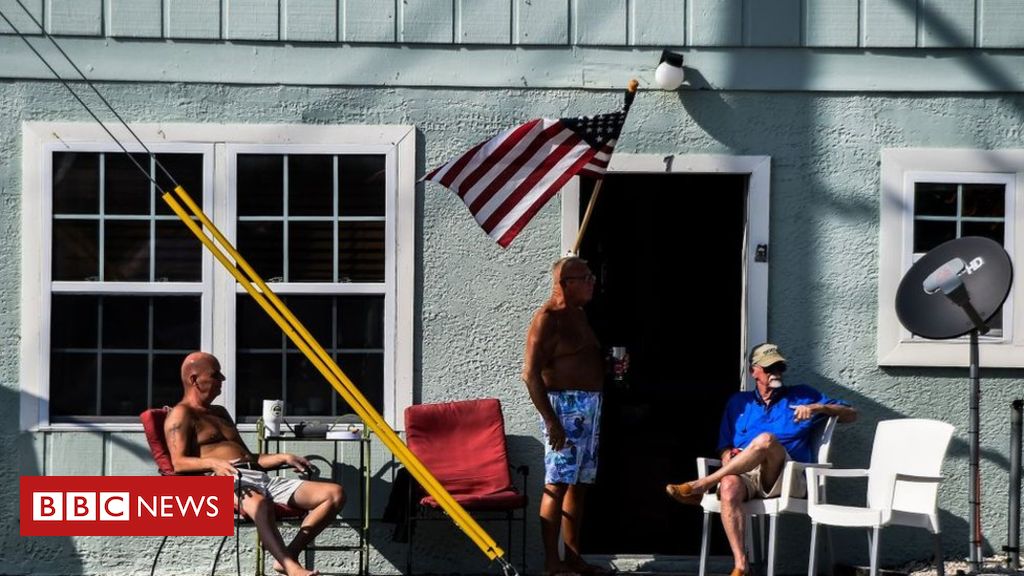