Coronavirus cases in Spain have risen by 1,500 to more than 5,700, public health officials say.

Spain is the worst affected country in Europe after Italy, which has more than 15,000 cases.

The Spanish government is set to announce a lockdown as part of a national state of emergency, according to local media reports.

On Friday, the World Health Organization (WHO) said Europe was now the "epicentre" of the pandemic.

What is the situation in Spain?

This will be only the second state of emergency in the country since the transition to democracy began in 1975, the first being a 2010 air traffic controllers' strike.

Local measures are already in force. The authorities in Madrid and its surrounding area have ordered the closure of most bars, restaurants and shops.

Shops selling foodstuffs, pharmacies and petrol stations are exempt. Similar measures have been brought in elsewhere, including the regions of Galicia and Catalonia.

The mayor of the southern city of Seville said he had suspended the famous Easter processions.

Catalan regional leader Quid Torra has said he wants to seal off the whole region, and has asked the authorities in Madrid to block access by air, rail and sea.

On Thursday the region's authorities locked down four towns north of Barcelona with a high number of cases.

Airlines are also stopping flights to Spain. Low-cost leisure airline Jet2 turned back planes in mid-air on Saturday as it announced it was cancelling all flights.

All but "essential travel" to parts of Spain should be avoided, says the UK Foreign and Commonwealth Office.

Why is Europe the 'epicentre'?

More than 132,500 people have been diagnosed with Covid-19 in 123 countries around the world, according to the WHO.

The total number of deaths has reached about 5,000 – a figure Dr Tedros described as "a tragic milestone".

"Europe has now become the epicentre of the pandemic, with more reported cases and deaths than the rest of the world combined, apart from China," he said.

"More cases are now being reported every day than were reported in China at the height of its epidemic."

As well as the increases in Spain and Italy, France has now confirmed 3,661 cases and 79 deaths.

Germany has seen 3,675 cases and eight deaths. There have been 798 confirmed infections in the UK and 11 deaths.

Italy has imposed a nationwide lockdown.

Meanwhile, at least 10 other countries in Europe are enforcing border closures, including: 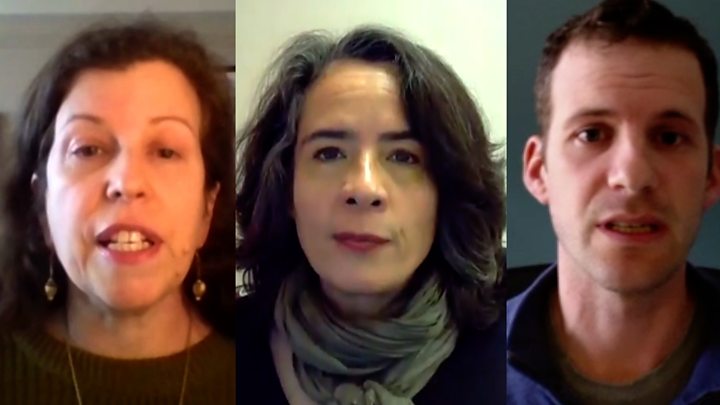