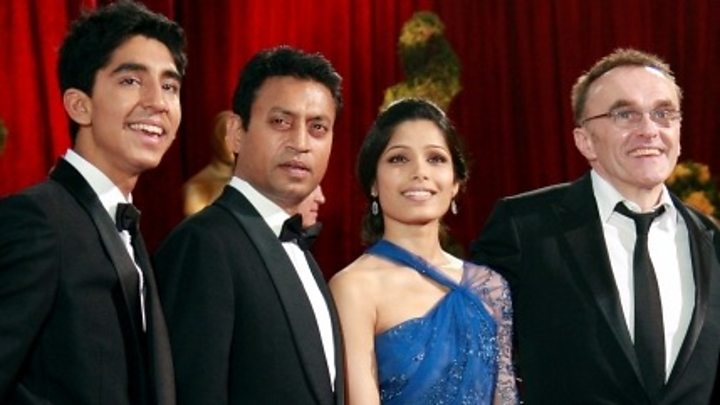 Priyanka Chopra, who starred with him in 7 Khoon Maaf in 2011, said his "charisma" made for "pure magic" on set and on screen.

Khan was also known for roles in Jurassic World, Life of Pi and the Oscar-winning Slumdog Millionaire.

Boyle told the BBC: "Irrfan was a wonderful actor and a pivotal figure in the making of Slumdog Millionaire."

He added: "It wasn't a huge role, and in fact on paper it was even less rewarding-looking.

"But Irrfan saw the possibility of guiding our audience – with his dignity, his grace, his charm, his intelligence and his calmness – through this crossword puzzle of an idea of a film."

Angelina Jolie said she had been privileged to work with Khan on the set of 2007 drama A Mighty Heart.

"He stood out for his generosity as an artist, which made it a pleasure to work in any scene with him," she told the BBC. "I remember the intensity of his commitment, and equally his smile. I send my condolences and my sympathy to his family, his friends, and all admirers of his work, in India and around the world."

Rogue One and Venom actor Riz Ahmed described Khan as "one of the greatest actors of our time".

"I never met him but he was an inspiration and a hero to me and millions of others," he wrote.

Chopra added on Twitter: "Your talent forged the way for so many in so many avenues. You inspired so many of us."

Jurassic World director Colin Trevorrow described Khan as "a thoughtful man who found beauty in the world around him, even in pain".

Having been diagnosed with a rare neuroendocrine cancer in 2018, Khan underwent months of treatment in the UK.

Khan's fellow Bollywood star Sonam Kapoor shared a photo of them together on Instagram, declaring: "You have no idea what your kindness meant to me at a time I was at my least confident."

Indian superstar Amitabh Bachchan, who worked with him on the film Piku, tweeted: "An incredible talent… a gracious colleague… a prolific contributor to the World of Cinema… left us too soon… creating a huge vacuum."

Actor Raveena Tandon tweeted that Khan was a "fantastic co-star, an actor par excellence, and a beautiful human being".

Irrfan shone so bright that we all reflected in his glory. Who will we look to for such integrity again?
The world is a lesser place now. Thank you for having the courage to be yourself and unlocking worlds for us, Irrfan. We will remember you.

Indian Prime Minister Narendra Modi also paid tribute, describing his death as "a loss to the world of cinema and theatre".