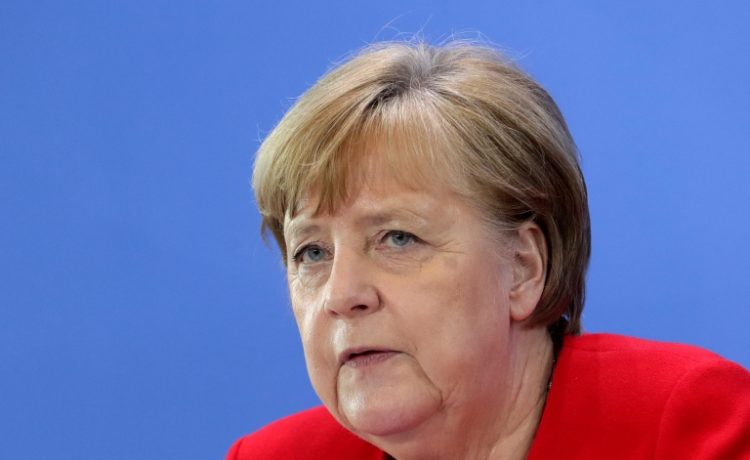 Chancellor Angela Merkel has said Germany's goal of slowing the spread of coronavirus has been achieved, so all shops can be reopened as lockdown restrictions are eased.

Bundesliga football has been given the green light to resume and schools will gradually reopen in the summer term.

Germany's 16 federal states, under an agreement with the government, will take control of timing the reopening.

They will operate an "emergency brake" if there is a new surge in infections.

General contact rules involving will continue for another month. A limited resumption has already begun, but this easing of restrictions is far broader.

Two households will be able to meet and eat together, and elderly people in nursing homes and facilities for the disabled will be able to have visits from one specific person.

'Germany doing better than other countries'

"I think we can safely state that the very first phase of the pandemic is behind us," Chancellor Merkel said. "But we need to be very much aware we are still in the early phases and we'll be in it for the long haul."

Bavarian leader Markus Söder said Germany was doing better than many other countries because it had adopted a good strategy nationally and regionally and everyone had remained patient. Social distancing of 1.5m (5ft) and hygiene were key to keeping the infection rate low, he said.

Germany has seen fewer than 7,000 deaths in the coronavirus pandemic – a much lower figure than in other Western European countries including the UK, Italy, France and Spain.

The Robert Koch Institute (RKI), a federal public health body, reported 165 deaths in the past 24 hours on Wednesday and some 947 new infections.

The rate of infection has been consistently low for some time, and Mrs Merkel said she was very pleased that the number of new, daily infections was into three digits. She praised the responsibility of German citizens in sticking to lockdown measures to protect the lives of others as well as themselves.

What has been agreed?

The popular daily newspaper Bild announced on Wednesday that Germany was opening up again. And broadly that is what has been agreed.

Shops of up to 800 square metres (8,600ft) in size have already been allowed to open. All restrictions on shops will now be lifted, although masks must be worn and social distancing maintained.

We are following a bold path. We can afford to be a bit bold but we must remain cautious

Schools have already begun opening for older children; all pupils will be allowed to return to class gradually during the summer term. "Children quite rightly want to return to their normal lives," said Mrs Merkel.

During Wednesday's talks, state leaders agreed to take responsibility for the consequences of lifting the lockdown, which came into force on 17 March.

Germany, in common with other countries, is wary of a second surge in infections. If new infections rise to above 50 people in every 100,000 in a district over a seven-day period, then it will be up to the local authority in the affected area to reimpose restrictions.

Germany's regional leaders get their way

Angela Merkel appeared cheerful as she stated that falling infection rates meant that Germany could now take some significant steps back towards normality.

She emerged after what was reportedly a stormy session with Germany's regional leaders who were so impatient to restart their local economies that some had already announced plans to relax restrictions before the meeting even began.

The leaders have got their way and many Germans will no doubt be delighted at the prospect of beer gardens and Bundesliga. Mrs Merkel too, who'd emphasised that no part of society should be left behind in any relaxation, may well be pleased by measures which will, for example, allow people in care homes a designated visitor.

But the chancellor, who's urged a cautious approach from the start, will perhaps savour most the concession she appears to have wrestled from the regional leaders. They have agreed to an emergency brake which forces local authorities to reimpose restrictions, should infections breach a certain number in their area.

A number of the 16 states have been less affected by the crisis, so some are more eager to ease restrictiRead More – Source