One in four US workers claiming jobless benefits 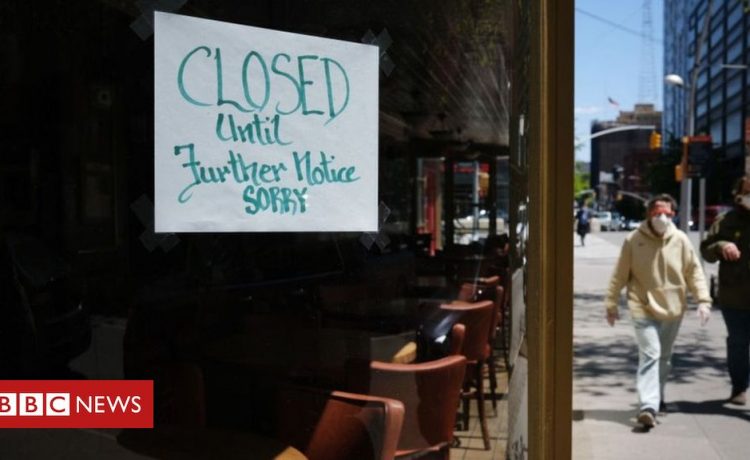 The number of Americans seeking unemployment benefits jumped by almost 3 million last week as virus shutdowns continue to weigh on the US economy.

The filings brought the total number of new jobless claims since the middle of March to more than 36 million.

That amounts to nearly a quarter of the American workforce.

The weekly figures have been falling since the end of March but remain massive by historic standards, eclipsing the prior record of 700,000.

"Today's unemployment claims continue their epic ascent on a cumulative weekly basis; not since the Great Depression has the US job market been in such a sorry state," said Richard Flynn, UK managing director at Charles Schwab.

The head of America's central bank warned this week that the economic recovery is likely to be slower than initially hoped.

In April, employers cut more than 20 million jobs, sending the unemployment rate to 14.7% and erasing nearly a decade of job gains. While the losses have fallen hardest on minority and low-income households, they have touched every part of the economy.

However, economists said they believe hiring will start to pick up as more states ease restrictions on activity.

The increase in the number of people receiving unemployment benefits in the week ended 9 May was "relatively modest", noted Paul Ashworth, chief US economist at Capital Economics.

"With most states only beginning to ease their lockdowns over the last 10 days, we expect a much bigger swing in hiring versus firing over the next couple of weeks, which suggests the unemployment rate will begin to drop back," he said.

"Being laid off hit me out of the blue

This is the first time I've been unemployed since I was 14. Being laid off kind of hit me out of the blue – in my company we thought we were all safe.

Applying for unemployment has been frustrating. You have to fax your notice in to the Department of Labour – but I don't have a fax machine. And then the receiving fax machine also needs to have paper – with government offices mostly cRead More – Source

Share on FacebookShare on TwitterShare on PinterestShare on LinkedIn Share on TumblrShare on RedditShare on VKontakte
adminMay 14, 2020