HomeSportsSteve Bruce yet to have Newcastle talks
Sports

Steve Bruce yet to have Newcastle talks 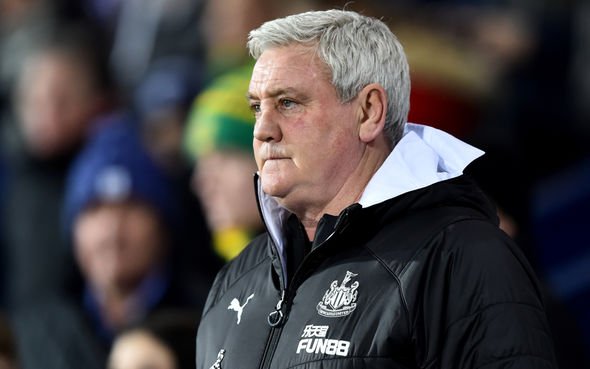 Steve Bruce still has no idea whether or not he will remain in place as Newcastle manager once the club’s £300million Saudi-led takeover is completed. Mike Ashley looks set to end his 13-year ownership of the Magpies, having agreed a big-money deal with a Saudi group spearheaded by Amanda Staveley six weeks ago.

Yet with suggestions that Staveley’s Middle East consortium want to sack Steve Bruce and replace him with the out-of-work Mauricio Pochettino, previously Tottenham boss, Bruce has not had contact from Ashley or the prospective new owners.

That’s according to the Daily Star, who says the 59-year-old – who replaced Rafa Benitez last summer – has been left in the dark about his St James’ Park future.

But the north east club are the joint-lowest scorers in the league with only 25 goals in 29 games and their lack of enterprising attacking football has seen Bruce come in for criticism.

The Star say that Bruce has been in regular contact with the club’s managing director Lee Charnley but has not heard from higher up, putting a cloud over his long-term future.

Steve Bruce had expected the takeover would be completed by now, with Premier League clubs to return to training in the coming days as the English top flight looks to return to action next month.

But the league has yet to give the thumbs up to the club’s new potential regime due to complications over the illegal TV streaming of matches.

The deal would see the Saudi Public Investment Fund buy 80 per cent of Newcastle but the Saudi state has not dealt with a TV station illegally pirating matches by steeling the feed of Qatar’s beIN SPORTS.

The Premier League have refused to comment on the matter with beIN SPORTS having urged the 20 clubs to lobby against the buying consortium.

Amnesty International has also written to the league with concerns about the human rights breaches in Saudi Arabia, insisting there are “serious questions” to address in the league’s owners and directors test.

That has delayed any deal and as such, Bruce is still unclear whether he will be in charge should Newcastle and their 19 rivals vote in Project Restart next week.

The Corbridge-born boss and his coaching staff are however said to be aware that performances will have to pick up in order for them to remain in the job for next season.

Newcastle are into the quarter-finals of the FA Cup for the first time since 2006 but Bruce may have to win the competition not to be sacked.

The Magpies boss spoke out about the Premier League’s plans to restart its 2019-20 campaign in mid-June.

The Newcastle squad will return to their Benton training base this Tuesday despite players harbouring concerns, with Danny Rose having publicly declared his opposition to the plans.

Bruce told the Daily Telegraph: “Weve listened to what has been said and, with the precautions taken, we will get back to work and start phase one.

“Can we get to that stage where we can have all the players on the pitch together? We dont know yet.

Phase one will be mainly fitness work, four or five players on a pitch. Let’s see how we get on.

“They have had eight weeks off and that is probably the longest break some of these players have had in their careers.

“If we’re doing pre-season, we would have six weeks and probably have six friendly games to get them ready for the first league match.

“So, we need a good stretch of time here to get them ready. Certainly once we get into stage two, that is vitally important.

“We need enough preparation to get these players into shape or they are just going to fall down like a pack of cards. Most of the manager have the same concerns.

“We would need at least six weeks. I don’t see how we can play games until the back end of June.

He added: “Certainly, the measures being put in place, you’re probably more at risk going to the supermarket or putting petrol in your car.

“We are in a fortunate position, we can get tested every three days.

“We will be tested on Sunday, every player and every member of staff. Once we get the results back, if everybody is OK, we are pencilled to start training again at 2pm on Tuesday afternoon.

“If a player becomes infected, he will be quarantined and will need to have two clear tests before they can come back to train.

“Danny Rose expressed his concerns, but Ive spoken to him and he is coming back as well. I dont think there is a footballer out there who has done more for the NHS throughout this than Danny.

“If a player refuses to come in or play, I have sympathy for that and would understand it. Most of my players are happy with it.

“There was a captains meeting the other day as well and as a squad they are happy with the measures that are being put in place. You have to respect everybodys personal views on it.”