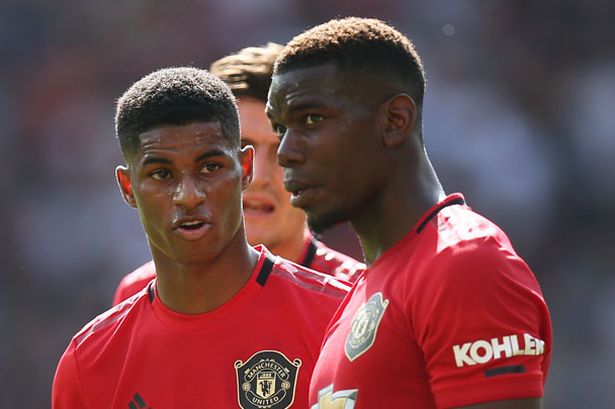 Manchester United boss Ole Gunnar Solskjaer has predicted Paul Pogba and Marcus Rashford will be back from injury when the Premier League starts up again. The duo have been sidelined since December and January respectively. But theyre now fit again and raring to go.

Manchester United have had to cope without Pogba for most of the season, with the France international limited to just eight appearances so far.

Rashford, meanwhile, has been out of action since sustaining a double back fracture in the 1-0 FA Cup win over Wolves in January.

United have done well without the duo in the time since, with Solskjaer seeing his side win eight of their last 11 matches across all competitions.

And the Norwegian, speaking to the clubs official website, has claimed Rashford and Pogba are on the brink of a return.

“Theyre looking good, theyve joined training now and theyve done everything the other boys have been doing. No reaction so far, touch wood,” he said.

“When we get started, it looks like we can have a full squad to choose from.”

Solskjaer also appeared to back Pogba by saying he, like Rashford, just wants to play football.

“Thats what you do when youre a footballer, you just want to play football,” he added.

“Of course, the first step now has been coming together, obviously in small groups, but theyve enjoyed that.

“I think when we start training in full groups, of course we need a bit of time to gel again, but theyre mentally ready and physically they look okay too.”

United have been back in training of late.

Last week the players returned with images showing them all working hard at the clubs Carrington training complex.

And Solskjaer has been delighted by how the players have responded to the coronavirus crisis and how theyve settled back in.

“Were back in training which has been great,” he said.

“The boys have been fantastic, the weathers been good and theyve enjoyed it.

“Hopefully now weve proved we can do this safely and we can move to the next step. Its been really enjoyable being on the training ground again.

“Everyones looking sharp, everyones been in with a good mood and weve been splitting up in groups so [working in] fours and fives together and theyve really done well.

“Hopefully, they can as I said, step up and go to bigger training groups but so far its been good.

“The players have been looking after themselves. Theyve done well. Charlie [Owen] the fitness coach, Kieran [McKenna], Michael [Carrick] and Martyn [Pert] have been on to them all the time. Theyve not had many days off!

“There have been video calls and of course the last couple of weeks theyve been stepping it up.”