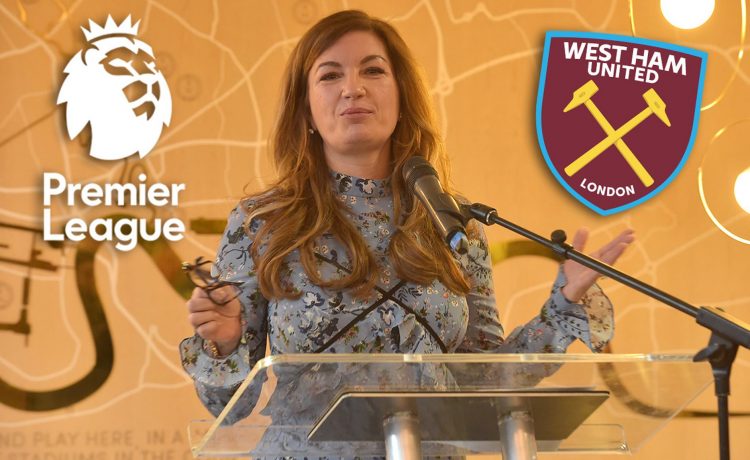 West Ham chief Karren Brady has raised some fears over the Premier League’s return in June.

West Ham chief Karren Brady has raised fears over the Premier Leagues attempts to restart. The Premier League has announced it will return on June 17 with two games that night to even up the games in hand, before the rest of the campaign starting the following weekend.

Manchester City will host Arsenal and Aston Villa face Sheffield United on the Wednesday night, meaning everyone will be even on 29 games.

And from there normal fixtures can return in a bid to complete the season.

But West Ham chief Brady admits she has fears over clubs having enough players fit to play – through injuries or having the virus – and also over what happens should the government step in and stop games if the virus spikes again.

She says clubs are already suffering injuries already after returning to training after the time off.

“Some clubs told us they had already suffered injuries, just as you would during a normal pre-season,” she wrote in her column for the Sun.

“Its a delicate balance. But if we want to finish this season, we are all going to have to accept a restart wont be perfect.

“There was a long discussion about squad management, or, put simply, what constitutes having a team fit enough to compete in the games left to play.

“There are obvious and genuine concerns about what happens to your match results if your club has a number of players testing positive for coronavirus, or in self-isolation.

“And as a result you simply cannot field your usual or strongest starting XI.

“Or what if other teams play a weakened first XI by choice when they have nothing to play for, or they want to give their first-team players a longer break.

“Or they simply want to protect players from catching the virus, and that ends up skewing results? Or what if your manager tests positive, as Arsenals did back in March?”

While keeping players fit will be a problem for the clubs after such a long time without proper training, they cannot control the way the virus will spread through the rest of the country.

And Brady fears the potential for a second lockdown ending the season, which could then be decided by points per game.

West Ham are 16th and in a battle for survival themselves. If Aston Villa were to win their game in hand they would overtake West Ham, who would drop to fourth bottom.

“Or what if the Government declares the games cannot re-start or continue be played due to a second wave of the virus requiring a new lockdown?” she added.

“Well at that point the season will be curtailed, and the Premier League are recommending a points- per-game formula to decide the award of places.”

Brady also described the potential for being relegated in that form as heartbreaking as clubs prepare to vote over how the season would be determined if it cannot be finished next week.