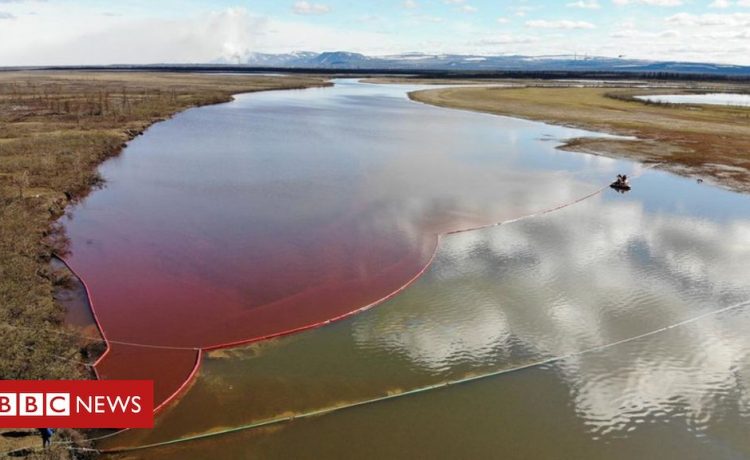 Russia's President Vladimir Putin has declared a state of emergency after 20,000 tonnes of oil leaked into a river within the Arctic Circle.

The spill happened when a fuel tank at a power plant near the Siberian city of Norilsk collapsed last Friday.

The plant is owned by a subsidiary of Norilsk Nickel, which is the world's leading nickel and palladium producer.

And in a televised video conference on Wednesday, Mr Putin lambasted the head of the company over the timeliness of its response.

"Why did government agencies only find out about this two days after the fact?" he asked the subsidiary's chief, Sergei Lipin. "Are we going to learn about emergency situations from social media?"

The region's governor, Alexander Uss, had earlier told President Putin that he became aware of the oil spill on Sunday after "alarming information appeared in social media".

Mr Putin has ordered an investigation into the accident and a manager at the power plant has since been detained.

In a statement, Norilsk Nickel said the incident had been reported in a "timely and proper" way.

The accident happened when the pillars supporting a fuel tank at a power plant began to sink. The area is built on permafrost which has been melting as the climate warms.

The leaked oil drifted some 12km (7.5 miles) from the accident site, turning long stretches of the Ambarnaya river crimson red.

The state of emergency means extra forces will be sent to the area to assist with the clean-up operation.

The accident is beliRead More – Source

Share on FacebookShare on TwitterShare on PinterestShare on LinkedIn Share on TumblrShare on RedditShare on VKontakte
adminJune 4, 2020