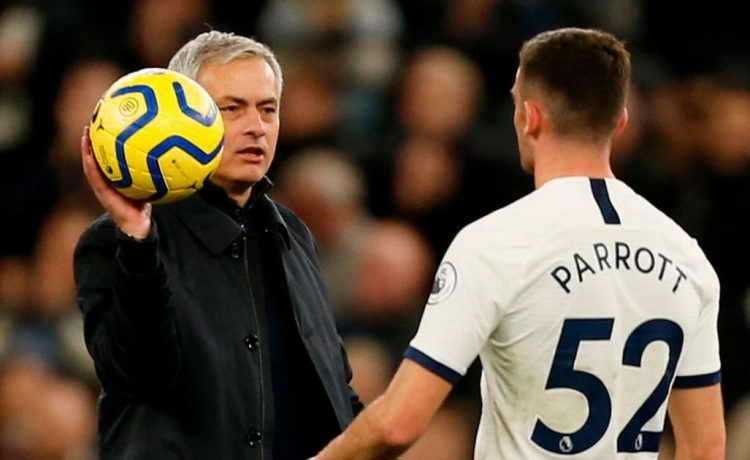 Tottenham are not expected to be busy in the summer transfer window.

Tottenham will reportedly look to sell up to four players in order to fund a move for Southampton midfielder Pierre-Emile Hojbjerg. Mourinho has struggled to find his preferred midfield selection, particularly in the defensive position.

Tanguy Ndombele has often occupied the role in front of the defence since joining last summer for a club-record fee.

But the Frenchman has fallen out of favour under Mourinho, with the Spurs boss often calling out Ndombele in the media.

There has been speculation suggesting Tottenham are ready to move on from Ndombele and go in a new direction.

And it appears as though Southampton’s Hojbjerg is the top choice for Mourinho heading into the summer.

But the Spurs boss may be hamstrung in the transfer market given how Tottenham have been financially impacted by the coronavirus pandemic.

Club chairman Daniel Levy took out a £175million loan last week to help combat the loss of revenue incurred by the pandemic, with sport and non-sporting events scheduled to take place at their state-of-the-art stadium either being postponed or cancelled.

It means Mourinho will likely have to target loan deals or players in the free agency market.

But The Times report Tottenham still have hopes of signing Hojbjerg from Southampton.

It is claimed Spurs were hoping a bid of around £20m would be enough to tempt Southampton into selling but the south coast club are holding out for £35m.

The report adds Tottenham will look to fund a move for the midfielder by offloading up to four players in the summer transfer window.

Both Kyle Walker-Peters and Danny Rose are expected to leave the club but it is also suggested Eric Dier and Serge Aurier will be made available.

Walker-Peters was loaned out to Southampton back in January, but the report claims they have no interest in making his move permanent come the summer.

Rose meanwhile is currently out on loan at Newcastle but the defender has previously indicated he has no plans on leaving the north London club until his contract runs out in 2021.

“It’s pretty obvious what happened [in the summer],” he said back in November.

“In January, you’re probably going to hear something [about my future].

“I’m telling you right now that I’m not going anywhere until my contract is finished.

“[Tottenham chairman] Daniel Levy told me in the summer there was no new contract for me at Tottenham, which is fine.

Share on FacebookShare on TwitterShare on PinterestShare on LinkedIn Share on TumblrShare on RedditShare on VKontakte
adminJune 12, 2020