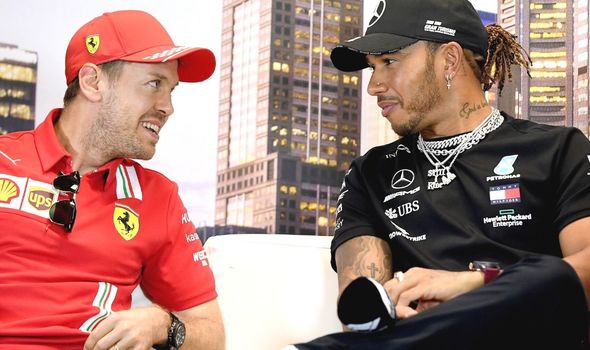 Lewis Hamilton and Sebastian Vettel are the most successful men on the current F1 grid.

Lewis Hamilton and Sebastian Vettel might one day unite at Mercedes with Toto Wolff refusing to rule out a move for the German despite his focus being on the drivers currently at the Silver Arrows’ disposal. A potential dream team made up of the two multiple-time F1 champions has been mooted with Vettel set to leave Ferrari later this year.

A swoop for Vettel would likely see Mercedes axe Valtteri Bottas, while junior driver programme graduates George Russell and Esteban Ocon would be passed over.

Team principal Wolff insists the Mercedes-linked quartet are ahead of the 32-year-old in the queue for a seat with the reigning constructors’ champions in 2021.

However, Wolff has left the door open for Vettel to one day partner Hamilton in a fantasy driver line-up.

“He has helped shape the past decade and is now surprisingly on the market. But now the focus is on our drivers. Sebastian is not our first priority, but you should never rule it out.”

Wolff’s comments come after Bottas this week claimed he has been given assurances that his place at Mercedes is not under threat from Vettel.

The Finn’s contract, and that of Lewis Hamilton, is set to expire at the end of the coming F1 season, which will start in Austria next month.

However, he is not concerned about the prospect of Vettel coming in to race alongside the six-time champion at Mercedes.

“It’s the same as every year for me,” Bottas said. “I find it quite funny that with not even a single race done, there’s been people getting my seat. It made me laugh! So there’s no pressure from that side.

“I have my clear goal for the season in my mind and that’s it. Things will then sort themselves one way or another, whatever’s going to happen. I’ve no stress about that at all.

“It doesn’t get to you. We’ve been very honest about what the situation is all the time about contracts, and I got a pretty straight message that no, they’re not considering Seb. So I said: ‘fine, no worries then’.”

Vettel’s options for 2021 seem to be diminishing with Red Bull already having shut down talk of a move for their former driver.

McLaren, meanwhile, have secured Daniel Ricciardo’s services to replace Ferrari-bound Carlos Sainz and Racing Point are happy to stick with Sergio Perez and Lance Stroll when they are rebranded as Aston Martin.

Share on FacebookShare on TwitterShare on PinterestShare on LinkedIn Share on TumblrShare on RedditShare on VKontakte
adminJune 15, 2020