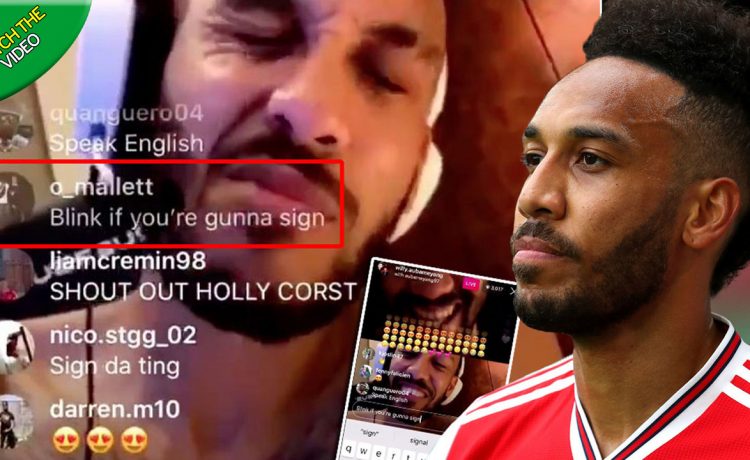 Pierre-Emerick Aubameyang has just one year left on his current Arsenal contract.

Pierre-Emerick Aubameyang sent Arsenal fans wild during an Instagram live video with his brother after appearing to confirm he will sign a new contract with the club. Aubameyang’s future at the Emirates has been a huge talking point over the past year.

Under Unai Emery, Aubameyang was reportedly growing increasingly frustrated at the direction of which the club were heading in.

Multiple reports emerged that he was seeking a move away from Arsenal with Barcelona touted as possible suitors.

After Mikel Arteta came in as Emery’s permanent replacement though, Aubameyang has dropped multiple hints that he could stay at the club.

Back in January, Aubameyang said: “I am the Arsenal captain. I love this club.

“I am committed to it and desperate to bring it back to the top, where it belongs.”

But there has so far been no agreement on a new contract with time running out for Arsenal to make a decision.

Arteta recently stated that he was “pretty positive” that the Gabon international would sign a new deal.

And Aubameyang has now dropped another hint suggesting an announcement could be made soon.

Appearing on an Instagram live video with his brother, Aubameyang had an array of posts from Arsenal fans pop up.

The 31-year-old responded by winking at the camera before exaggerating the gesture even further.

Some Arsenal fans quickly caught wind of the video, believing a new deal will be announced soon.

Aubameyang has been in excellent form for Arsenal once again this season, scoring 19 goals in 31 games.