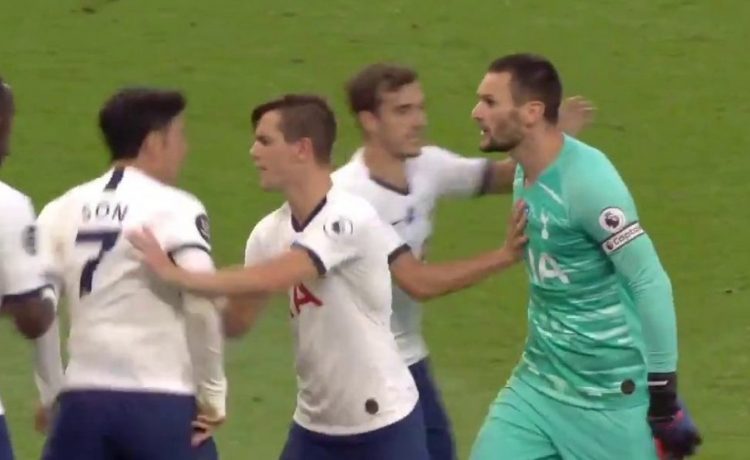 Tottenham boss Jose Mourinho has branded Hugo Lloris and Son Heung-Min’s half-time spat as ‘beautiful’. The Portuguese also claims he could be to blame for tensions boiling over after demanding more from his players after their disappointing 3-1 defeat at Sheffield United last week.

Lloris and Son were separated at half time of their 1-0 win against Everton on Monday night.

Everton ace Richarlison almost scored for the Toffees right before half time, with his effort going just wide.

Son lost the ball seconds before Everton’s chance, with a fuming Lloris shouting at the winger after the incident.

When the whistle went for half time, Lloris sprinted at Son, with the pair shouting at each other with Giovani Lo Celso in the middle of the two players.

The argument looked set to boil over before other Spurs stars stepped in and separated Lloris and Son.

And Mourinho branded the incident as ‘beautiful’, with the Tottenham boss claiming he could be the man to blame.

He said: “It’s beautiful. It’s probably as a consequence of our meetings.

“If you want to blame someone for that it’s me. I was critical of my boys – they were not critical enough with themselves.

“I asked them to be more demanding of each other.

“Son is an amazing kid, everybody likes Son but the captain told him you have to do more and give more to the team.

“It’s something needed for the team to grow up – to grow up you need big personalities. When you have that reaction I had no doubts.”

Lloris was asked about the bust-up after the game, with the Frenchman playing down the incident.

“It belongs to the changing room,” he told Sky Sports.

“Outside you can say whatever you want. There is a lot of respect between all the players.

“What happened between me and Son is just something that is part of football sometimes, but there is no problem at all.

“You can see at the end of the game we are more than happy to be part of the team and to have the three points.”

Ex-Tottenham ace Jamie Redknapp was vocal on the incident, claiming the spat proves the players care about results.

Redknapp said: “For the Richarlison chance just before half-time, Son gives up on the ball. Theres a reaction, Lloris is proud, he doesnt want to see anyone running at his back four. He shouts at Son, its probably the most exciting thing thats happened in the half!

“This might be a consequence of what happened in the Sheffield United game, when he did make a challenge. He runs up to him, he puts Lo Celso in the way almost.

“Ive seen it with Steve McManaman, Bruce Grobbelaar, and at least it shows they care. There wasnt enough of that against Sheffield United, in the dressing room itll be sorted out quickly, theyll shake hands, theyll get on with it. Youve got to have that sometimes.

“Its not the first time its happened in football and it wont be the last. You want to see players showing a bit of passion, and if hes not doing his job Son, hes got to get back, and he didnt! Sometimes you have to let people know.”