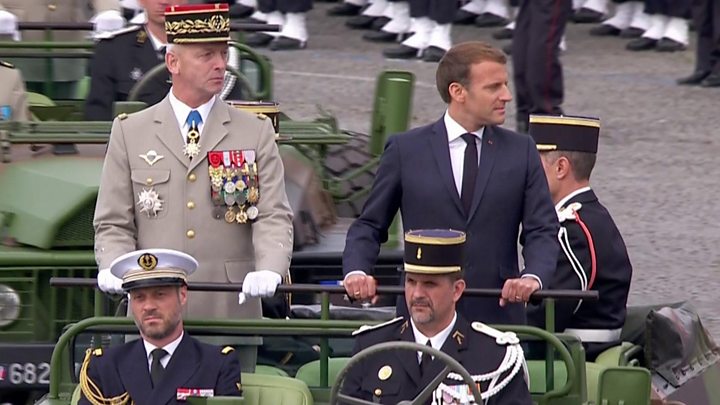 France is honouring its health workers at scaled-down events to mark the national celebration Bastille Day, amid the ongoing coronavirus pandemic.

Authorities cancelled the traditional military parade but instead are holding a tribute to those tackling the virus.

The annual events mark the storming of Bastille prison on 14 July 1789, seen as the start of the French Revolution.

It is the first time officials have called off the annual military parade through the capital Paris since the end of World War Two in 1945.

President Emmanuel Macron will give a rare televised interview after ceremonies in the morning.

How is France celebrating?

Around 2,000 French soldiers gathered for a ceremony in the Place de la Concorde.

It began with a tribute to Gen Charles de Gaulle, who 80 years ago famously called on France to resist the Nazi German occupation in a radio address from the BBC in London.

Though there is no parade on the Champs-Elysées, the troops will honour all those mobilised to tackle the coronavirus outbreak – including health workers and the armed forces.

It comes the day after the French government agreed on pay rises worth €8bn (£7.2bn; $9bn) for French health workers.

A traditional fly past included military aircraft as well as a transport plane used to carry Covid-19 patients at the height of the pandemic in France.

Some 2,500 specially invited audience members – including the families of health workers who died during the pandemic – watched events from socially-distanced seating.

Officials from four nations who took in French patients – Austria, Germany, Luxembourg and Switzerland – were also invited to watch.

Events are closed to the public, although they are being televised. Many areas of Paris have been shut to prevent crowds gathering.

Traditional fireworks by the Eiffel Tower will take place at 23:00 local time as a "symbol of the resilience of our capital and our nation and a tribute to all the everyday heroes who worked during the duration of the epidemicRead More – Source

Share on FacebookShare on TwitterShare on PinterestShare on LinkedIn Share on TumblrShare on RedditShare on VKontakte
adminJuly 14, 2020