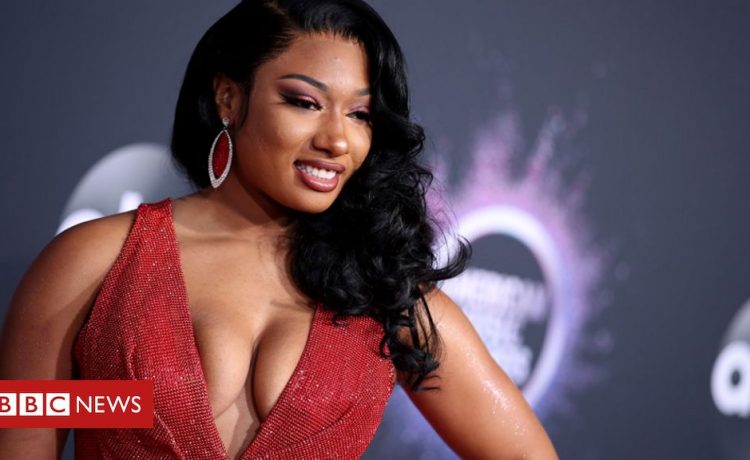 US rapper Megan Thee Stallion has said she's "grateful to be alive" after being shot, but has given few details of her injuries or how they happened.

The chart-topping star said she "suffered gunshot wounds" on Sunday and is expected to make a full recovery.

A video apparently showed her bleeding from her foot after police stopped a car also containing rapper Tory Lanez.

He was later charged with carrying a concealed weapon. Police said one person had suffered "a foot injury".

The Texas-born rapper, whose real name is Megan Pete, topped the US chart in May with Savage.

The song, which became a viral dance craze on TikTok, also reached number three in the UK, thanks to a remix featuring Beyonce.

It had been reported that she had cut her foot on broken glass during the incident in the Hollywood Hills, in which Lanez was arrested. But she took to Instagram on Wednesday to "set the record straight".

"On Sunday morning, I suffered gunshot wounds, as a result of a crime that was committed against me and done with the intention to physically harm me," she wrote.

"I was never arrested, the police officers drove me to the hospital where I underwent surgery to remove the bullets.

"I'm incredibly grateful to be alive and that I'm expected to make a full recovery, but it was important for me to clarify the details about this traumatic night."

She also wrote: "This whole experience was an eye opener and a blessing in disguise. I hate that it took this experience for me to learn how to protect my energy."

Police said officers responded to reports of gunshots at about 04:30 PST (11:30 GMT) on Sunday.