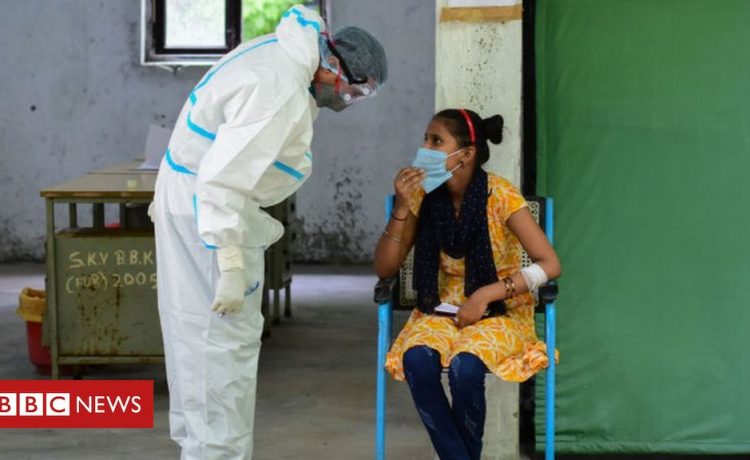 It has the world's third-largest case load, after the US and Brazil – the only three countries so far to record more than a million coronavirus cases.

India's active cases account for about a third of its total tally as it has been reporting a high recovery rate and a low death rate from the virus.

But deaths have been rising. At 25,602, they are eighth-highest in the world.

The western state of Maharashtra continues to be the biggest hotspot with the highest case tally – more than 280,000 – among all the states.

But new hotspots are emerging as states in the south – Karnataka and Andhra Pradesh – and in the east – Bihar, West Bengal – record a rapid rise in daily case numbers.

Although India confirmed its first coronavirus case at the end of January, the pandemic took hold slowly. Experts believe it was staved off to some extent because of an early decision by the government – in March – to stop all international flights and enter a strict lockdown that lasted nearly two months.

But the restrictions came at a devastating economic and human cost, and after India reopened at the end of June, cases quickly added up as testing increased.

With the world's second-largest population, much of which lives packed into cities, India was perhaps always destined to become a global hotspot.

The true extent of the infection in the larger population is unclear, but India has ramped up testing considerably in recent weeks.

The country is still not testing enough people, or a broad enough swathe of people, to control the spread effectively.

Share on FacebookShare on TwitterShare on PinterestShare on LinkedIn Share on TumblrShare on RedditShare on VKontakte
adminJuly 17, 2020