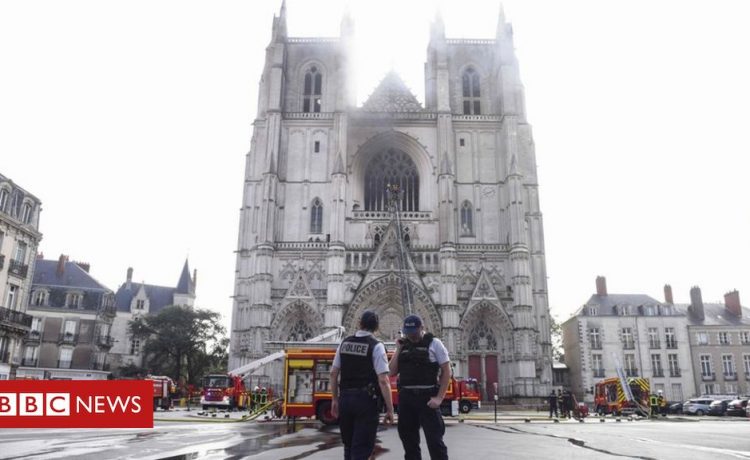 A fire at the cathedral in the French city of Nantes is believed to have been started deliberately, prosecutors say.

Three fires were started at the site and an investigation into suspected arson is under way, Prosecutor Pierre Sennes said.

The blaze destroyed stained glass windows and the grand organ at the Saint-Pierre-et-Saint-Paul cathedral, which dates from the 15th Century.

It comes a year after the devastating fire at Notre-Dame cathedral in Paris.

But the local fire chief said the fire in Nantes had been contained and was "not a Notre-Dame scenario".

"The damage is concentrated on the organ, which appears to be completely destroyed. The platform it is situated on is very unstable and risks collapsing," Laurent Ferlay told reporters.

The cathedral roof had not been touched by the blaze, he said.

President Emmanuel Macron has reacted, tweeting: "After Notre-Dame, the St Peter and St. Paul Cathedral is in flames. Support to the firemen who are taking all the risks to save the Gothic jewel."

The French fire service tweeted footage of the blaze.

The fire began in the early morning, with massive flames visible from outside the building. More than 100 firefighters brought it under control after several hours.

Newsagent Jean-Yves Burban said he heard a bang at about 07:30 local time (05:30 GMT) and saw flames when he went out to see what was happening.

"I am shook up because I've been here eight years and I see the cathedral every morning and evening. It's our cathedral and I'vRead More – Source

Share on FacebookShare on TwitterShare on PinterestShare on LinkedIn Share on TumblrShare on RedditShare on VKontakte
adminJuly 18, 2020