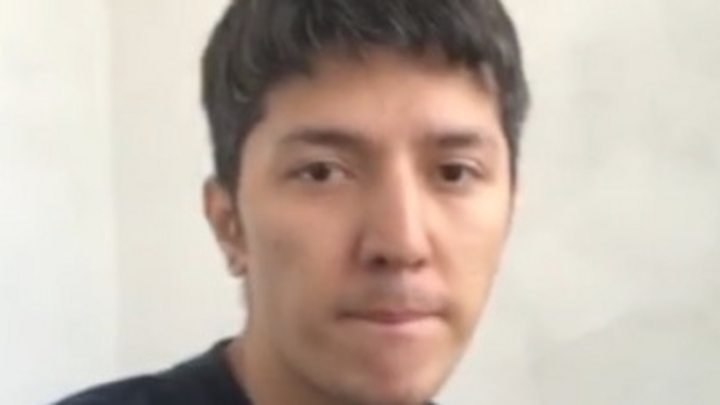 Merdan Ghappar was used to posing for the camera.

As a model for the massive Chinese online retailer Taobao, the 31-year-old was well paid to flaunt his good looks in slick promotional videos for clothing brands.

But one video of Mr Ghappar is different. Instead of a glitzy studio or fashionable city street, the backdrop is a bare room with grubby walls and steel mesh on the window. And in place of the posing, Mr Ghappar sits silently with an anxious expression on his face.

Holding the camera with his right hand, he reveals his dirty clothes, his swollen ankles, and a set of handcuffs fixing his left wrist to the metal frame of the bed – the only piece of furniture in the room.

The video of Mr Ghappar, along with a number of accompanying text messages also passed to the BBC, together provide a chilling and extremely rare first-hand account of China's highly secure and secretive detention system – sent directly from the inside.

The material adds to the body of evidence documenting the impact of China's fight against what it calls the "three evil forces" of separatism, terrorism, and extremism in the country's far western region of Xinjiang.

Over the past few years, credible estimates suggest, more than one million Uighurs and other minorities have been forced into a network of highly secure camps in Xinjiang that China has insisted are voluntary schools for anti-extremism training.

Thousands of children have been separated from their parents and, recent research shows, women have been forcibly subjected to methods of birth control.

In addition to the clear allegations of torture and abuse, Mr Ghappar's account appears to provide evidence that, despite China's insistence that most re-education camps have been closed, Uighurs are still being detained in significant numbers and held without charge.

It also contains new details about the huge psychological pressure placed on Uighur communities, including a document he photographed which calls on children as young as 13 to "repent and surrender".

And with Xinjiang currently experiencing a spike in the number of coronavirus infections, the dirty and crowded conditions he describes highlight the serious risk of contagion posed by this kind of mass detention during a global pandemic.

The BBC sent detailed requests for comment to the Chinese Foreign Ministry and Xinjiang authorities but neither responded.

Mr Ghappar's family, who have not heard from him since the messages stopped five months ago, are aware that the release of the four minute, thirty-eight second video of him in his cell might increase the pressure and punishment he faces.

But they say it is their last hope, both to highlight his case and the plight of the Uighurs in general.

His uncle, Abdulhakim Ghappar, who now lives in the Netherlands, believes the video could galvanise public opinion in the same way that footage of the police treatment of George Floyd became a powerful symbol of racial discrimination in the US.

"They have both faced brutality for their race," he says.

"But while in America people are raising their voices, in our case there is silence."

In 2009, Merdan Ghappar – like many Uighurs at that time – left Xinjiang to seek opportunity in China's wealthier cities in the east.

Having studied dance at Xinjiang Arts University, he found work first as a dancer and then, a few years later, as a model in the southern Chinese city of Foshan. Friends say Mr Ghappar could earn up to 10,000 Rmb (£1,000) per day.

His story reads like an advert for the country's dynamic, booming economy and President Xi Jinping's "China Dream". But the Uighurs, with their Turkic language, Islamic faith and ethnic ties to the peoples and cultures of central Asia, have long been viewed as an object of suspicion by Chinese rulers and faced discrimination in wider society.

Mr Ghappar's relatives say that Mr Ghappar was told it would be best for his modelling career to downplay his Uighur identity and refer to his facial features as "half-European".

And although he had earned enough money to buy a sizeable apartment, they say he was unable to register it in his own name, instead having to use the name of a Han Chinese friend.

But those injustices now seem mild by comparison with what was to come.

Ever since two brutal attacks targeting pedestrians and commuters in Beijing in 2013 and the city of Kunming in 2014 – blamed by China on Uighur separatists – the state has begun to view Uighur culture as not only suspicious but seditious.

By 2018, when the state had come up with its answer – the sprawling system of camps and jails built rapidly and extensively across Xinjiang – Mr Ghappar was still living in Foshan, where his life was about to take an abrupt turn for the worse.

In August that year, he was arrested and sentenced to 16 months in prison for selling cannabis, a charge his friends insist was trumped up.

Whether truly guilty or not, there was little chance of an acquittal, with statistics showing that more than 99% of defendants brought before Chinese criminal courts are convicted.

But, upon his release in November 2019, any relief he felt at having served his time was short lived. Little more than a month later, police knocked on his door, telling him he needed to return to Xinjiang to complete a routine registration procedure.

The BBC has seen evidence that appears to show he was not suspected of any further offence, with authorities simply stating that "he may need to do a few days of education at his local community" – a euphemism for the camps.

On 15 January this year, his friends and family were allowed to bring warm clothes and his phone to the airport, before he was put on a flight from Foshan and escorted by two officers back to his home city of Kucha in Xinjiang.

There is evidence of other Uighurs being forced to return home, either from elsewhere in China or from abroad, and Mr Ghappar's family were convinced that he had disappeared into the re-education camps.

But more than a month later they received some extraordinary news.

Somehow, he had managed to get access to his phone and was using it to communicate with the outside world.

Merdan Ghappar's text messages, said to have been sent from the same room as his self-shot video, paint an even more terrifying picture of his experience after arriving in Xinjiang.

Written via the Chinese social media app WeChat, he explains that he was first kept in a police jail in Kucha.

"I saw 50 to 60 people detained in a small room no bigger than 50 square meters, men on the right, women on the left," he writes.

"Everyone was wearing a so-called 'four-piece-suit', a black head sack, handcuffs, leg shackles and an iron chain connecting the cuffs to the shackles."

China's use of these combined hand and leg cuffs has been criticised in the past by human rights groups.

Mr Ghappar was made to wear the device and, joining his fellow inmates in a caged-off area covering around two-thirds of the cell, he found there was no room to lie down and sleep.

"I lifted the sack on my head and told the police officer that the handcuffs were so tight they hurt my wrists," he writes in one of the text messages.

"He shouted fiercely at me, saying 'If you remove your hood again, I will beat you to death'. And after that I dared not to talk," he adds.

"Dying here is the last thing I want."

He writes about the constant sound of screaming, coming from elsewhere in the jail. "Interrogation rooms," he suggested.

And he describes squalid and unsanitary conditions – inmates suffering from lice while sharing just a handful of plastic bowls and spoons between them all.

"Before eating, the police would ask people with infectious diseases to put their hands up and they'd be the last to eat," he writes.

"But if you want to eat earlier, you can remain silent. It's a moral issue, do you understand?"

Then, on the 22 January, with China at the height of its coronavirus crisis, news of the massive, nationwide attempt to control the epidemic reached the prisoners.

Mr Ghappar's account suggests the enforcement of quarantine rules were much stricter in Xinjiang than elsewhere. At one point, four young men were brought into the cell aged between 16 and 20.

"During the epidemic period they were found outside playing a kind of game like baseball," he writes.

"They were brought to the police station and beaten until they screamed like babies, the skin on their buttocks split open and they couldn't sit down."

The policemen began making all the prisoners wear masks, although they still had to remain hooded in the stuffy, over-crowded cell.

"A hood and a mask – there was even less air," he writes.

When the officers later came around with thermometers, several inmates including Mr Ghappar, registered higher than the normal body temperature of 37C (98.6F).

Still wearing his "four-piece suit", he was moved upstairs to another room where the guards kept the windows open at night, making the air was so cold that he could not sleep.

There, he said, the sounds of torture were much clearer.

"One time I heard a man screaming from morning until evening," he says.

A few days later, the prisoners were loaded onto minibuses and sent away to an unknown location. Mr Ghappar, who was suffering from a cold and with his nose running, was separated from the rest and taken to the facility seen in the video he sent – a place he described as an "epidemic control centre". Once there, he was handcuffed to the bed.

"My whole body is covered in lice. Every day I catch them and pick them off from my body – it's so itchy," he writes.

"Of course, the environment here is better than the police station with all those people. Here I live alone, but there are two people guarding me."

It was the slightly more relaxed regime that gave him, he says, the opportunity he needed to get word out. His phone appears to have remained unnoticed by the authorities among his personal belongings, some of which he was given access to in his new place of imprisonment.

After 18 days inside the police jail, he was suddenly and secretly in touch with the outside world.

For a few days he described his experiences. Then, suddenly, the messages stopped.

Nothing has been heard from Mr Ghappar since. The authorities have provided no formal notification of his whereabouts, nor any reason for his continued detention.

It is impossible to independently verify the authenticity of the text messages. But experts say that the video footage appears to be genuine, in particular because of the propaganda messages that can be heard in the background.

"Xinjiang has never been an 'East Turkistan'", says an announcement in both Uighur and Chinese from a loudspeaker outside his window.

"Separatist forces at home and abroad have politicised this geographical term and called for those who speak Turkic languages and believe in Islam to unite," the announcement says.

James Millward, a professor of history at Georgetown University and an expert on China's policies in Xinjiang, translated and analysed Mr Ghappar's text messages for the BBC.

He says they are consistent with other well documented cases, from his transportation back to Xinjiang and the initial processing in crowded, unsanitary condRead More – Source

Share on FacebookShare on TwitterShare on PinterestShare on LinkedIn Share on TumblrShare on RedditShare on VKontakte
adminAugust 5, 2020