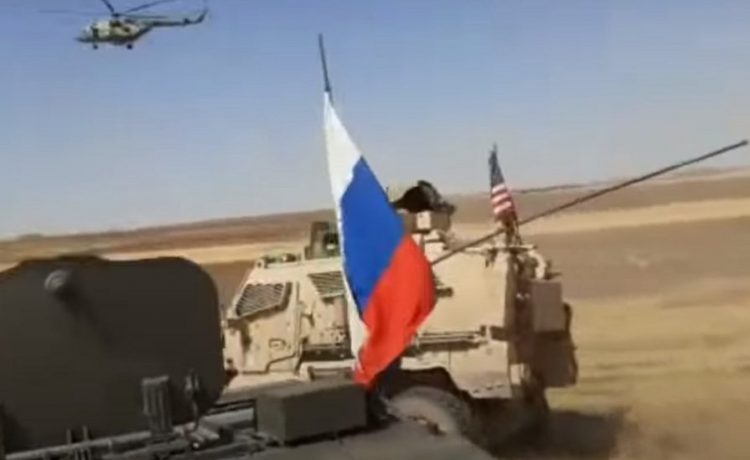 The Russian and US governments have blamed each other for a collision between Russian and US armoured vehicles in north-eastern Syria in which several US troops were injured.

Video of the collision was broadcast by a Russian nationalist website, Rusvesna.su, then widely retweeted.

The video appears to show a Russian military vehicle in a desert convoy ramming a US armoured car, as a Russian helicopter flies low overhead.

Russia says the US obstructed a patrol.

A US defence official told BBC partner CBS News that Russian forces had entered a "security zone" that they had agreed to stay out of.

The White House said the vehicle's crew sustained minor injuries in the collision.

News of the incident broke on Wednesday. There have been frequent interactions between US and Russian forces in Syria, but confrontations are considered rare.

The Russians back Syrian government forces while the Americans support local Kurdish fighters, in a civil war that has convulsed the country since 2011.

What did Russia say about the incident?

The Russian defence ministry said it had given the US military prior warning that it would be patrolling in the area.

"Despite that, in violation of existing agreements, the US armed forces soldiers tried to block the Russian patrol," said a ministry statement quoted by Tass news agency.

"In response to that, the Russian military police took necessary measures to prevent an incident and to carry on fulfilling the mission they had been given."

Syria has hosted Russian military police since 2016. They were deployed to maintain law and order in parts of Syria under government control, protect Russian forces and oversee ceasefires in so-called de-escalation zones.

Russia emboldened by diminished US presence

There have been numerous incidents involving US forces in north-eastern Syria. A week or so ago they came under fire from Russia's Syrian allies.

Back in February 2018 a large force of Russian mercenaries launched an assault against US positions near a major oilfield. They were repulsed, suffering heavy casualties.

This latest incident though is different. It results from a direct confrontation between the official Russian military and US troops. The Americans contend that this is part of a pattern of incidents. Russia is breaking a variety of local co-ordination agreements, they say, and is essentially harassing US forces.

So why is this happening now? Moscow sees the US as on the way out in Syria. Last October, President Donald Trump famously decided to withdraw 1,000 US troops that were operating in support of Kurdish allies, only to change his mind, retaining a much smaller force in a more restricted area.