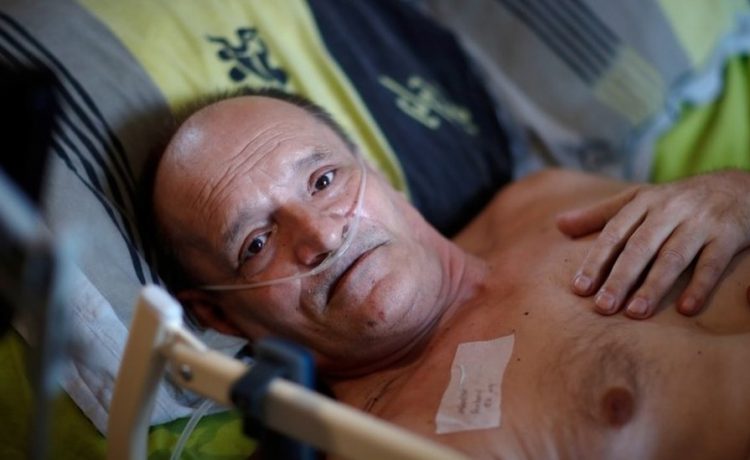 Facebook says it will block a Frenchman suffering from an incurable condition from livestreaming his own death.

Alain Cocq, 57, planned to broadcast his final days after starting to refuse food, drink and medicine on Saturday.

President Emmanuel Macron had earlier denied his request for euthanasia.

Mr Cocq wants the law changed in France to allow terminally ill people to die as they wish. Some groups, including the Catholic Church, oppose euthanasia on moral grounds.

"The road to deliverance begins and believe me, I am happy," Mr Cocq posted on Facebook early on Saturday morning from his bed at home in Dijon, after announcing he had "finished his last meal".

"I know the days ahead are going to be difficult but I have made my decision and I am calm," he added.

Mr Cocq suffers from a degenerative disease, which causes the walls of his arteries to stick together.

But Facebook blocked the plan to livestream his death, stating that it did not allow portrayals of suicide.

"Although we respect [Mr Cocq's] decision to want to draw attention to this complex question, following expert advice we have taken measures to prevent the live broadcast on Alain's account," a Facebook spokesman told the AFP news agency.

"Our rules do not allow us to show suicide attempts."

Mr Cocq said Facebook was blocking his broadcasts until 8 September. He called upon his supporters to lobby the social media platform to change its stance.

In July, Mr Cocq penned a letter to Mr Macron, asking the president to allow him to die "with dignity," describing his "extremely violent sufferinRead More – Source

Share on FacebookShare on TwitterShare on PinterestShare on LinkedIn Share on TumblrShare on RedditShare on VKontakte
adminSeptember 5, 2020