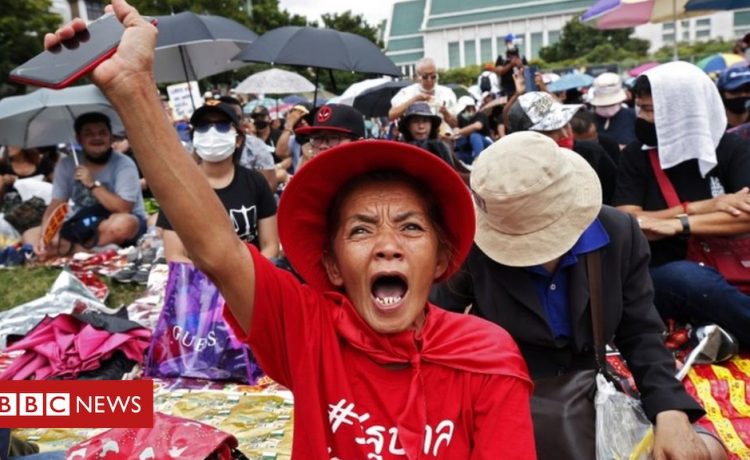 Protesters have begun gathering in the Thai capital Bangkok, in what organisers hope will be the largest anti-government demonstration so far.

The city has seen weeks of almost-daily rallies calling for the prime minister's resignation.

Some are also urging reforms to the monarchy, despite the risk from the country's strict royal defamation laws.

Tens of thousands of people are expected to turn out for Saturday's student-led protests.

A previous protest in August drew around 10,000 protesters, according to Thai police.

However, organisers expect a higher turnout this weekend and police say 5,000 people have already gathered, according to Reuters news agency.

The movement is demanding that Prime Minister Prayuth Chan-ocha – who took power in a 2014 coup and won disputed elections last year – stand down.

The calls for royal reform are particularly sensitive, with criticism of the Thai monarchy punishable by long prison sentences.

The BBC's correspondent in Bangkok Jonathan Head says a series of political scandals and the impact of the coronavirus pandemic have led to growing discontent in the country.

Why are there protests?

Thailand has a long history of political unrest and protest, but a new wave began in February after a court ordered a fledgling pro-democracy opposition party to dissolve.

The Future Forward Party (FFP) had proved particularly popular with young, first-time voters and garnered the third-largest share of parliamentary seats in the March 2019 election, which was won by the incumbent military leadership.

Protests were re-energised in June when prominent pro-democracy activist Wanchalearm Satsaksit went missing in Cambodia, where he had been in exile since the 2014 military coup.

His whereabouts remain unknown and protesters accuse the Thai state of orchestrating his kidnapping – something the police and government have denied.

Since July there have been regular student-led street protests.

Demonstrators have demanded that the government headed by Prime Minister Prayuth Chan-ocha, a former army chief who seized power in the coup, be dissolved; that the constitution be rewritten; that the authorities stop harassing critics.

What is different this time?

The demands of protesters took an unprecedented turn last month when a 10-point call for reform to the monarchy was read out at one rally.

The move sent shockwaves through a country which is taught from birth to revere and love the monarchy and fear the consequences of talking about it.

The young woman who delivered the manifesto, Panusaya Sithijirawattanakul, has said their intention "is not to destroy the monarchy but to modernise it, to adapt it to our society".

But she and her fellow activists have been accused of "chung chart" – a Thai term meaning "hatred of the nation" – and they say they are deeply fearful of the consequences of doing "the right thing" by speaking out.

What are the laws protecting the monarchy?

Each of Thailand's 19 constitutions of modern times has stated, at the top, that: "The King shall be enthroRead More – Source

Share on FacebookShare on TwitterShare on PinterestShare on LinkedIn Share on TumblrShare on RedditShare on VKontakte
adminSeptember 19, 2020