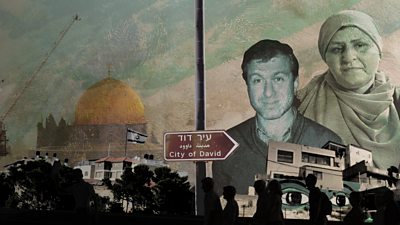 An investigation by BBC News Arabic has found that Russian oligarch, Roman Abramovich, controls companies that have donated $100m to an Israeli settler organisation.

Elad operates in occupied East Jerusalem. By allowing settlement activity in the area Israel is considered to be in breach of international law. Israel disputes this view.

Analysis of the bank documents leaked to Buzzfeed News who shared them with the International Consortium of Investigative Journalists and the BBC has revealed that Chelsea football club owner, Abramovich, is the biggest single donor to the organisation.

Elad also runs the City of David and other archaeological sites, visited by a million tourists each year in Jerusalem.

There are arguments that Israel is breaking international law by allowing exploratory archaeological digs to be carried out in occupied land.