express– Andre asked Leigh Anne to marry him on their fourth anniversary. The singer posted a number of snaps to her Instagram account to announce her engagement to her fans.

She wrote: “Guys..wtf has just happened… He bloody did it, and I said yes.

“I’m marrying my soul mate, the man of my flipping dreams… I am lost for words, so I think I’m just going to go cry some more @andregray_ I love you so much.

“My world is literally complete.”

She posted a number of pictures from the engagements, showing her crying with delight and wrapping her arms around her husband to be.

The ring is a huge cushion cut black diamond, hardly a traditional sparkler.

The square shape rock is in a dazzling white diamond halo with a split shank and diamonds on the band.

Jewellers at Joshua James told Capital: From the image, we can see it’s a beautiful and unique large vintage inspired black diamond ring, which looks to be a cushion-cut, with its softly rounded corners.

Fans poured in to compliment the ring.

One wrote: “Erm, most amazing ring ever?”

Another said: “Love your ring.”

Leigh Anne Pinnock and her bandmates have been appearing on Little Mix The Search, looking for the next big band.

This time they are in the judging seat as they coach teams through a competition.

Her fiance, Andre, plays as a striker for Watford.

The 29-year-old is originally from Wolverhampton.

Leigh Anne Pinnock is not the only celebrity showing off her engagement ring.

The ring has a yellow oval stone as the central gem, thought to be a yellow diamond.

This large sparkler sits between two white baguette diamonds, one either side.

This collections of stones is set on a white gold band.

This ring has been said to be worth in the region of £8,000 by a expert

“I put make-up on at 3am”: Stacey Solomon opens up about acne shame she felt when first dating Joe Swash 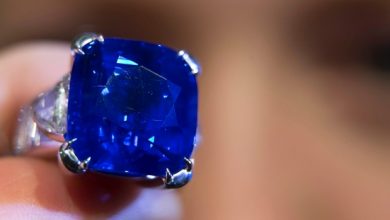