thewmai– Nike’s wildly popular green, black and white team kit for the Nigerian football squad at the World Cup in Russia is now on show at the Design Museum in Kensington. Licensed versions of the strip sold out in minutes in London during summer’s tournament.

Part of the appeal was the exuberant zigzag motif, which has seeped into cultures all over the world. Today you can find it woven into rugs, fabrics and baskets and painted on pottery, in new work from Asia, Africa and South America but its heritage is ancient.

A simple “V” is one of man’s earliest symbols, dating back perhaps 75,000 years. The shape has since evolved to encompass triangles, diamond forms and chevrons.

Discerning decorators now covet “tribal” furnishings brought to the UK by entrepreneurs such as Diane and Jim Gaffney of Textile Traders, who have been sourcing handmade Asian fabrics since 1984, while Magie Relph and Bob Irwin scour Africa for their website The African Fabric Shop. Prices are modest.

Martin Waller brings treasures from his far-flung travels to his South Kensington store, Andrew Martin. He also adapts angular ikat and kelim motifs for chic modern fabrics, from £35 for a linen blend up to £120 for a printed velvet.

“You only need a simple loom to make a V or diamond,” explains Saffron Hare, creative director at designer fabrics specialist James Hare in Leeds. “Updated into Western design, these basic geometrics are decorative without being too specific and are great for layering with florals.”

“Triangles are symbols of protection in Berber culture,” says Sophia Leppard, of Yonder.living. Early modernists loved them, such as Le Cobusier, Charles and Ray Eames, and Alvar Aalto.

Bold, angular geometrics stripped down to basic Vs, triangles, diamonds and chevrons are a stylish foil to this season’s splashy florals, lush leaves and printed velvets. Martha Coates, heading up design at Habitat, says: “I draw on tribal sources but add a contemporary palette. And we are using triangles for furniture and lighting this autumn. It’s a modern take on a tribal look.”

In Gospel Oak, Scottish embroiderer Laura Lees, trading as The Mighty Stitch, is updating triangles with her confident collage, piecing together felted wool, silk and even leather for furniture, cushions, stools and more. Missoni’s zigzags have ruled the home furnishings world since the brand began in 1953. Go Modern in King’s Road is sole UK retailer of Missoni furniture. At Amara, zigzag towels are currently top sellers.

In Chelsea, geo-wizard Tom Faulkner has made the triangle his own, balancing two on their points for the base of his best-selling Ava table. The flamboyant Swoon furniture brand designs new pieces monthly. “We’ve a sophisticated take on the V line which fits a signature bold Deco aesthetic,” says design chief Sam Baldry.

Using simple tiles, make your own V-chevrons on wall or floor. “Play around with different sizes,” says Claire O’Brien, head of design at British Ceramic Tile. “A single colour is a sleek and sophisticated look, but a mix will be unique. Careful planning is vital. 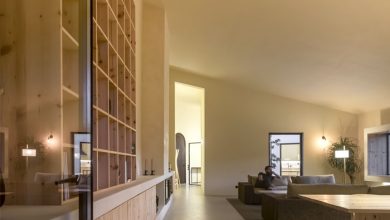 House in Alentejo by BICA Arquitectos

AT THIS RIO APARTMENT, THE VIEW STEALS THE SHOW FROM THE PROVOCATIVE ART