elledecor– Aveteran fashion publicity and marketing executive who has spent decades working at brands like Ralph Lauren, Tommy Hilfiger, Giorgio Armani, and, most recently, Burberry, George Kolasa knows his way around a storytelling opportunity. Still, when he and his husband, Justin Tarquinio, a publishing executive who worked at Hearst for over a decade, went looking for an East Hampton second home in 2014, he could hardly have predicted the narrative arc behind their eventual purchase.

The couple fell for the Sherrill Farmhouse, a place with bones from the 1700s, rebuilt in 1858, that served as a working dairy farm in the 1940s. The home had been owned exclusively by nine generations of the Sherrill family, one of the founding families of East Hampton; due to a lack of funding, they were looking to sell it to a nonblood relative. But they were clear that they wanted people who would steward the home through the future, not raze it to the ground.

“I am the perfect example of someone who wasn’t looking for this, but stumbled upon it,” says Kolasa, a Long Island native who has been coming to the Hamptons for years, of his newfound role as a de facto preservationist. “And I’m now a huge advocate and supporter of other people who want to try to do this with other homes.”

The Sherrill Farmhouse was in need of considerable care, a fact that became evident when the previous owner spent two hours walking Kolasa and Tarquinio through details of its storied history. A head of the East Hampton Historic Society also joined in, encouraging the couple in their restoration endeavors. They sought out specialists who could strip the original 18th-century floors, doors, windows, and walls of layers of paint and polyurethane, while preserving their natural integrity. The garden and pool were overgrown and in a state of disrepair; Kolasa cleared things away and landscaped the garden himself, aiming for an English country feel.

Then he dove into even more research, consulting old photos of the house and driving around other historic farmhouses in the area for inspiration. His goal was that all furnishings be 19th century. With the exception of a few items, he achieved this feat, scouring the Brimfield Flea Market in Massachusetts, a Paris flea market, and local estate sales, among other spots, for finds.

The final result is a house that is warm and vibrant—and also part of the town of East Hampton’s annual historic homes tour. Since purchasing Sherrill Farmhouse, the couple also bought the land next door, which Kolasa has further landscaped, and a shed that now serves as a charming poolhouse. And since the onset of COVID-19, he and Tarquinio have made their East Hampton abode their main residence.

“I have really changed my priorities in my life by being out here,” explains Kolasa, who left Burberry in October 2019 and has been working on a series of lifestyle-oriented projects. “It’s about the beauty of the nature that surrounds us.”

The living room exudes coziness thanks to a two-seater sofa and armchairs from the British heritage company George Sherlock and covered in Ralph Lauren fabrics. ELLLE DECOR A-List designer Alfredo Paredes, who spent 33 years at Ralph Lauren and now has his own design studio, turned Kolasa onto the George Sherlock brand, and Kolasa visited their factory while in England and watched his seating pieces being made. “Alfredo was a huge help,” Kolasa notes. “I’m fortunate to have a lot of great friends and help. This is not a house I did on my own.”

To complete the look, they reused a quirky assortment of found objects, including tables made from old-fashioned laundry carts, a small vintage pommel horse, and a map of Long Island, purchased from Nellie’s Antiques in Amagansett, New York.

Hanging above the mantel is the home’s original deed. “[It] was given to me by the sister of the one of the family members,” Kolasa explains. “It’s a very, very special memento.”

Kolasa didn’t want the matchy-matchiness of a kitchen island in the same color and make as the cabinetry. Instead, his contractor built a table out of salvaged wood from the house’s shed, and Kolasa topped it with marble. The vintage metal and wood stools are from Beall & Bell in Greenport, New York.

After purchasing the adjacent property, Kolasa forklifted a shed from its neighboring land and turned it into a poolhouse. Inspired by the feeling of the RRL store in East Hampton—whose opening coincided with his time at Ralph Lauren—Kolasa created an Americana fantasia inside, complete with vintage wicker chairs covered in a Ralph Lauren fabric, a pine cabinet from the East Hampton Historical Society Antiques Fair, heirloom quilts, a vintage 48-star American flag, and a Matt Albiani photograph of a lifeguard on duty

The main bedroom also reveals Paredes’s influence. Kolasa wanted a king-size bed, which made a historically accurate piece an unlikely find. So he chose a custom wood design, similar to one Paredes has in his own Shelter Island, New York, home, and created a headboard covered in a vintage linen from Christopher Howe Fabric in London. The sheets and blanket are by Matteo, and the leather stool is from the Animal Rescue Fund in Sagaponack, New York.

The facade of the Greek Revival Sherrill Farmhouse, built in 1858. The Sherrills were one of the founding families of East Hampton, New York, and their home remained in the family for nine generations until George Kolasa and Justin Tarquinio purchased it in 2014. 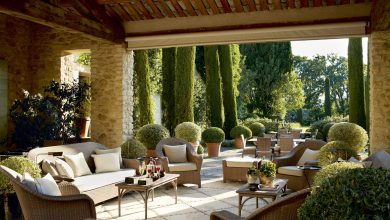 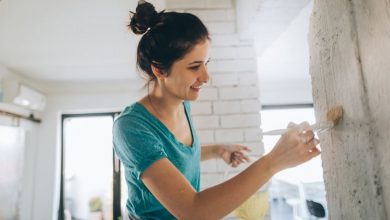 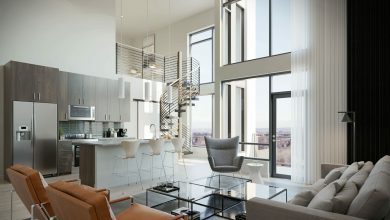 WITH SOFT HUES AND CURVES GALORE, THIS MANHATTAN APARTMENT IS THE DEFINITION OF SOPHISTICATION