elledecor– Linda Rodin had to get out of New York. The maverick stylist, model, and entrepreneur had called Manhattan home for decades, and the city was entering its third month in lockdown. Like many people, she began to imagine a life somewhere else. And so Rodin, who grew up on Long Island, began scouting for a place where she could garden and where her longtime canine companion, Winky—a sprightly 20-pound poodle—could explore life beyond the downtown Chelsea apartment building where they have lived together for many years (42 for Linda, 11-plus for Winky).

After looking at a handful of homes in Port Washington, Long Island, Rodin found what she was seeking farther east in Oyster Bay—somewhere that could offer some quiet, even if the place required some imagination.

“The house reminded me of a place that Joni Mitchell would have lived in in Laurel Canyon in the ’70s,” Rodin says. “And that was my fantasy.”

After learning that the roof needed to be replaced, the basement redone, and the stove converted from electric to gas—not to mention getting briefed on all the ins and outs of plumbing restrictions—the longtime city-dweller realized that the interior design was the only attribute of the home that was fully within her control.

That’s where her close friend, the prop stylist and set designer Jeffrey W. Miller, came in. For more than 30 years, Rodin and Miller have accompanied each other to flea markets and collaborated on fashion shoots as well as her line of dog accessories, Linda and Winks. Naturally, Miller was the perfect partner to help Rodin transform the three-bedroom home, which sits on a two-and-a-half-acre lot.

“Jeffrey has impeccable taste, and it’s nice to have someone who can confirm that I’m not crazy, because the things I buy can be crazy,” Rodin says. “We’re on the same wavelength.”

With nowhere to go during the depths of the COVID-19 pandemic, Rodin snagged almost all of the furniture online, from the mirror, sconces, and Scandinavian chest in the entry to the 1950s jadeite green sink, tub, and toilet set in the primary bathroom. (Like many of us, Rodin admits to spending much of her time down the rabbit hole of Instagram.)

Rodin set about painting the walls in Benjamin Moore’s Decorator’s White and the floors in a high-gloss white to create the feeling of taller ceilings, as well as sorting through her acquired collections, furniture, and bits and bobs to find the perfect place for her flea-market treasures.

Rodin knew she had to have a mustard yellow piece in the living room. Three, actually: A set of sofas from the Scandinavian furniture company Hem and a chair by Moroso. The artisans behind MA Estudio, whom she’d met on a trip to Mexico right before lockdown, custom made the rug. Rodin decorated the living room with art she has acquired over the years, ranging from a museum-worthy 1940s painting by Kurt Craemer that she bought in Positano, Italy, to a piece by her dear friend the novelist and painter Frederic Tuten, to a $20 print of Bob Dylan she bought on Prince Street in Manhattan 25 years ago. She also included a number of works from shows at Turn Gallery, on the Upper East Side.

But her favorite room is the kitchen, which she completely gutted with the exception of the original slate floor. Rodin loves lounging on the white pleather sofa by Blu Dot, surrounded by Mexican pottery and a collection of Panamanian baskets, while she looks out over the lush yard filled with roses, daisies, foxgloves, and a coveted cement block bench Rodin saved as her gardener was wheeling it away as trash—she jokes that “it’s my Donald Judd sofa.” Something she did haul out from the city: A large part of her collection of 150 potted plants.

And yet, with her house bought, furnished, and blooming, with the fantasy having become a lived reality, Rodin and Winky never felt fully settled in their new rural setting and have decided to sell the house. “Winky prefers his walks on the sidewalk,” she says. “I didn’t intend not to keep it, but a city mouse can’t quite be a country mouse.”

“I had never designed a house before—it was the biggest canvas I’d ever had to work with,” she says. “I would buy it all over again, because it’s exactly what I wanted. It was a salvation for me, and then I realized I had to be home.”

Simply put, Linda Rodin had to get back to New York City. 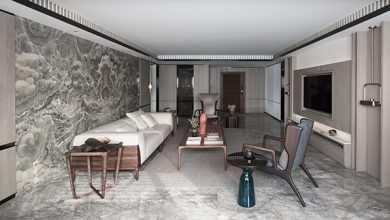 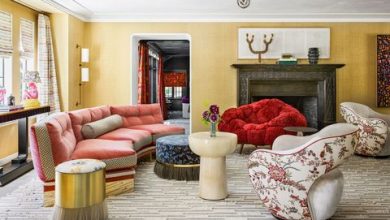 WHO CAN TURN A SILICON VALLEY TUDOR INTO A ROCK-AND-ROLL FANTASIA? KEN FULK, OF COURSE