elledecor– When Maria Grudina first saw Russian House, a complex of 395 apartments in the center of St. Petersburg, she was enchanted. Designed to suggest an old Russian palace, complete with elaborate stonework and fairy-tale turrets, the residence is one of the city’s most talked-about new buildings. Grudina and interior designer Tim Veresnovsky visited an apartment on the top floor. “It was the princess’s tower that every girl dreams about from childhood,” says Grudina, the cofounder of a health-care resort who has three young daughters.

While most apartments in the complex were moving fast, the agent explained that this particular unit had been hard to sell: Potential buyers were daunted by the 26-foot ceilings of the tower room. Some had considered dividing it into two floors. But Grudina and Veresnovsky agreed that the tower had an exceptional allure. As the apartment was too small for her family, even as a pied-à-terre, Grudina, whose primary home is outside the city, envisioned it as a creative space where she could not only host her guests but hold literary events and other cultural gatherings—a place to spark the imagination.

Veresnovsky had already designed several spaces for Grudina, including rooms at her high-tech antiaging health resort on the Gulf of Finland. “Russian interior design tends to be very conservative,” Grudina says. “I like Tim’s bravery, the way he brings his clients out of their comfort zone. If you can be brave along with him, you get great results that are unusual for Russia. He has a truly international vision.”

A St. Petersburg native whose first artistic passion was photography, Veresnovsky has no formal design training. He considered studying at a Russian art and design school but soon found that such institutions lacked what he calls “the spirit of the contemporary.” He studied the history of design on his own and often traveled abroad, cultivating his sensibility. Photography had already refined his eye for color, composition, and detail. “I want interiors to be contemporary, laconic—but at the same time, I always include a historical approach,” he says.

A talent for combining the modern and the historical made Veresnovsky a perfect choice to work in a building like Russian House. “Tim has such a subtle understanding of the building and its historical context,” Grudina says. “Some designers forget about the particularities of the setting, but everything he does seems to come organically.”

Because the complex had just been constructed, Veresnovsky began with an almost blank slate, as well as carte blanche from his client. (The only request was that the home have plenty of light.) “When I started, the apartment was just a concrete box,” Veresnovsky says, “like Batman’s cave—someplace to fly out of at night and save the world.” Given the location and the nature of the building’s architecture, he knew that he wanted to play with Russian design history while incorporating global elements befitting Grudina’s interest in cutting-edge medical advances and modern culture.

The apartment’s front door opens onto a vestibule with a bold checkerboard floor in natural black-and-white marble, the kind often seen in Russian palaces; this style was also favored by 19th-century Russian designers, who learned it from the French and the Italians. The checkers repeat at varying scales in a console and, above it, an oil painting by contemporary Russian artist Anna Arktika. “I like rhythm, a sense of movement,” Veresnovsky says. The staccato two-tone patterns return in the striped alcove kitchen and a gray-and-white marble bathroom.

Mindful of the need for light, Veresnovsky extended the living room windows with white stucco arches that evoke traditional Russian architectural techniques. Curlicue molding recalls the ornate, Italian-style, 18th-century palaces that fill the canal-crossed center of St. Petersburg. A bespoke lamp hanging at the center of the room brings to mind the circular chandeliers of Orthodox churches, but its bright white is the antithesis of a church’s incense-darkened interiors. The crosses cut out of the lamp’s panels double as plus signs, a nod to Grudina’s medical positivism. Above the fireplace, a black-and-white artwork depicting Mickey Mouse riffs on Orthodox icons and brings a dash of ironic Pop internationalism. “We know Russian history, but we all grew up with Disney cartoons,” Veresnovsky says.

Above a 1960s Italian desk in the guest bedroom, a William Morris tapestry evokes the most readily recognizable aspect of Soviet domestic interiors: the wall rug. Wall tapestries were long treasured in Russia for their beauty and powers of insulation. In Soviet times, handmade versions gave way to cheap carpets that were paired with the plastic-lacquered furniture sets churned out by the Soviet equivalent of Ikea. A French-style tapestry registers this history while restoring the humble wall hanging to its former glory, one more touch of Veresnovsky’s subtle wit.

In the primary bedroom, a contemporary Russian painting (the kind that would have been banned in the USSR) depicts a half-nude woman in the arms of a beast—another fairy-tale reference. What Veresnovsky created for Grudina is something magical. And upon first entering the completed apartment, she danced alone, joyfully, in her high tower. 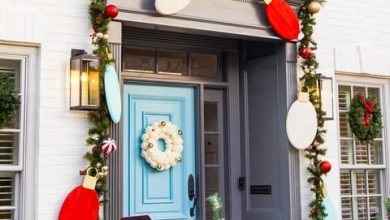 A hotel with style, substance – and its very own island 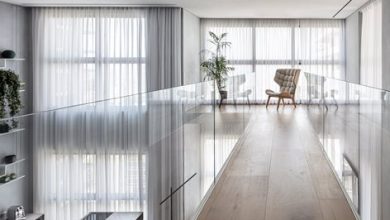 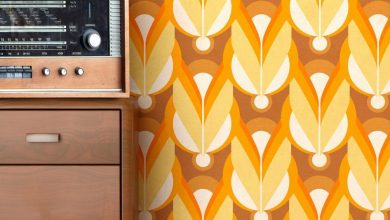