Tired of your typical Big Mac or Chicken Legend order? It may be time to take a trip abroad. A food blogger who goes by the name of Small Girl Big Eatz attended the McDonald’s Worldwide Convention and shared some of the fascinating menu items from across the globe.

The McDonald’s Worldwide Convention took place between April 4 and April 7, 2022.

Small Girl Big Eatz took to TikTok to share some of the most exciting items on the menu.

The food influencer started by sharing a photo of a green-hued Macha McFlurry from Japan.

McDonald’s fans were particularly impressed by the Pistachio McFlurry from Japan, with one TikTok user, @jodierosecup stating: “Omg I’m so jealous they get pistachio McFlurries.”

She added: “I wouldn’t stop eating it though.”

Small Girl Big Eatz also tried the McPops, small doughnuts, from Spain, which boast filling such as custard and chocolate.

China’s McSpicy in caused uproar as fans were jealous that their own countries did not have this particular menu item.

@jayeryane responded to Small Girl Big Eatz: “Okay, I don’t know what influence you have, but you’re there.

“TELL THEM TO BRING THEIR MCSPICY TO EVERY MARKET.”

@galaxysvpernova commented: “We have the Deluxe Potatoes in Mexico too – you can even add cheese to them.”

@eivoivutti from Finland said: “Shaker fries are the best too.”

@xantheatsfood responded: “If UK maccies did a chai latte I’d be there everyday.”

The TikTok went down a storm, amassing more than 97,000 likes so far and over 6,000 shares, with so many McDonald’s lovers crying out to sample global menus from the fast food giant.

@daisymaureenmanning suggested: “All the McDonald’s in the world should swap their menus for a month. 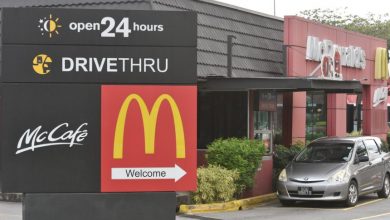 Christmas champagne brunch on a skyscraper includes a diamond gift worth £1,000