Legal arguments were not the only thing under such heavy scrutiny at the high court this week. The media coverage of the “Wagatha Christie” libel trial has seen the sartorial choices of all involved under rigorous examination.

Headlines such as “Rebekah Vardy teams £1,316 vintage Chanel dress with £650 bag” and “Coleen Rooney arrives at court in £1,565 Mugler blazer and (one) £615 Gucci loafer” – a reference to Rooney’s ankle boot – have been displayed online as prominently as any cross-examination.

Even Coleen’s husband Wayne – a man more used to being judged on a football pitch – has been condemned by the fashion jury. Wearing an immaculate navy raincoat and holding a black Fendi bag as he walked down the court’s steps with Coleen, he has been likened to a “suicidal bouncer” and a PE teacher roped in to cover geography.

However, it is still the women that photographers have jostled for the best shot of the two women arriving, making it clear they not only have to prepare for the verdict of the judge, but also for the rest of the world.

“We have to recognise the scrutiny that famous women are under is hugely intensified in this environment,” said Dr Kirsty Fairclough of Manchester Metropolitan University. “Every detail is getting attention.”

But there is power in clothes, something two media-savvy celebrities will be all too aware of. This also means there could be intention behind the choices, she added: “There is often an entire team around celebrities that is responsible for that image. It’s all highly choreographed, highly performative”.

Vardy has been going all out on the celebrity-meets-royal dressing, wearing pieces by designers previously worn by the Duchess of Cambridge. “She’s showing us she’s the more refined person,” said the fashion psychologist Carolyn Mair.

Meanwhile, Rooney has stayed closely aligned to the high street, wearing a monochromatic Zara dress. “Coleen is showing her allegiance to the rest of us,” said Mair. “She’s dressing for the people so that they empathise with her.”

The repeated use of tailoring and “the stronger shoulder” by both women shows that “They want to be taken seriously and show they are in control,” said the image consultant Penny Bennett.

Stateside, the media attention around Johnny Depp and Amber Heard’s dock dressing – while they battle out their his’n’hers defamation suits in Virginia – has been no less intense.

Decoding these looks can only ever be a matter of conjecture, however. “That’s always the issue with fashion,” said Mair. “Unless there’s a slogan that makes it clear, it can be interpreted in lots of different ways.” 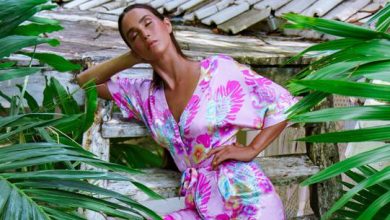 Fabric from seaweed and buttons made from Irish cow’s milk

Chrissy Teigen Wore Nothing but Leggings and a Moto Jacket to the Playground – and, Yes, She’s Pregnant